Chicago Teachers Union strike 2 weeks away if no deal reached, mayor says missed days will not be made up 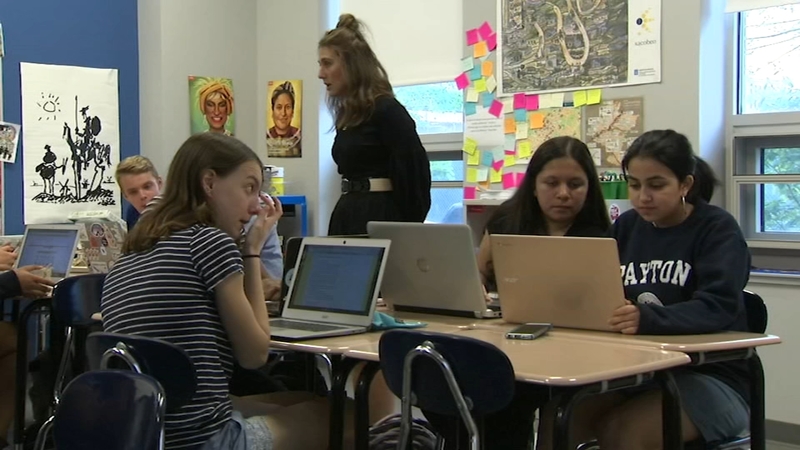 Possible CTU strike 2 weeks away, mayor says missed days will not be made up

CHICAGO (WLS) -- Chicago Public Schools teachers say they will go on strike two weeks from Thursday if a new contract is not worked out.

But there's a new wrinkle in the negotiation as Mayor Lori Lightfoot said if there is a work stoppage, missed days will not be made up.

The Chicago's Teacher's Union and Chicago Public Schools each said they want to reach a deal before October 17.

Chicago Teachers Union President Jesse Sharkey speaks as the union has set an October 17 strike date if a deal is not reached with Chicago Public Schools.

A point of contention for the teachers is how much prep time they get each day. The mayor said she is not going to trade instructional time for prep time, and that appears to be an issue where the two sides remain far apart.

Negotiators for CPS met with their counterparts at CTU Thursday morning, but CTU President Jesse Sharkey said they are not making any progress.

"The Board of Education has submitted many proposal and things that are unacceptable to us and we reject those very clearly, and it doesn't require me to write a dissertation to say we are not giving back prep time," Sharkey said.

The teachers said the district is trying to take away the prep time they won in their last contract, and then give it back as part of the negotiations.

The mayor saw the demand for prep time as one that would threaten instructional time for students, and she wasn't budging there.

"I can tell you this definitively, we're never cheating our kids on the day of instruction, we're not going to shorten the school day," she said. "That's not going to happen."

The Chicago Teachers Union represents about 25,000 employees and another 7,000 support staff are represented by SEIU. SEIU filed an intent to strike as well last week, and on Thursday formally set their strike date as October 17 as well.

"The Chicago Teachers Union, though, is saying this is about more than just money. We're very concerned to deal with a number of critical staffing shortages in schools. We want to deal with class size caps. Those are all things we need in negotiation," Sharkey said.

"We still only have a nurse one day a week," said Lillian Kass, teacher. "When a child gets sick we have to tell them to go into the office and call home."

CPS released part of its strike contingency plan. If there is a walkout, school buildings will be open for students, and breakfast and lunch will be served.

Lightfoot also said any missed days will be just that, and will not be made up.

"We view that as punitive, we view that as something that's never happened in the history of these negotiations and or strikes. Perhaps that's just a rookie mistake by her," said Stacy Davis Gates, CTU vice president.

The union denied the strike threat was a political power play on their part after their support failed to help Toni Preckwinkle win the mayor's race. Lightfoot said she was not worried about a strike being a potential embarrassment to her.

"For me it's not about caving or not caving it's about doing something that's right and honors the hard work and sacrifice of our teachers, but as I said before my primary focus is making sure that our kids are safe, that they are in a nurturing environment and that they are taken care of," the mayor said.

But when asked about that, Lightfoot responded, "We did put it in writing. We passed it in our budget that passed at the end of August. I think that's the surest way of assuring that we're going to make sure that we get this done."

Mayor Lightfoot said the education and safety of CPS students is the priority and wants to work around the clock to get a deal done before the strike date, but the problem is both sides claim the other isn't responding to their issues.

"I've repeatedly asked union leadership to partner with us to help develop the pipeline for nurses, for librarians for counselors," Lightfoot said.

What could make things more complicated are the city's talks with another union, SEIU, which represents CPS support staff and park district works who might also strike this month.

"All three of those groups together represents a lot of bargaining pressure and we hope gives us the opportunity to win some of the things we were talking about," Sharkey said.
EMBED More News Videos