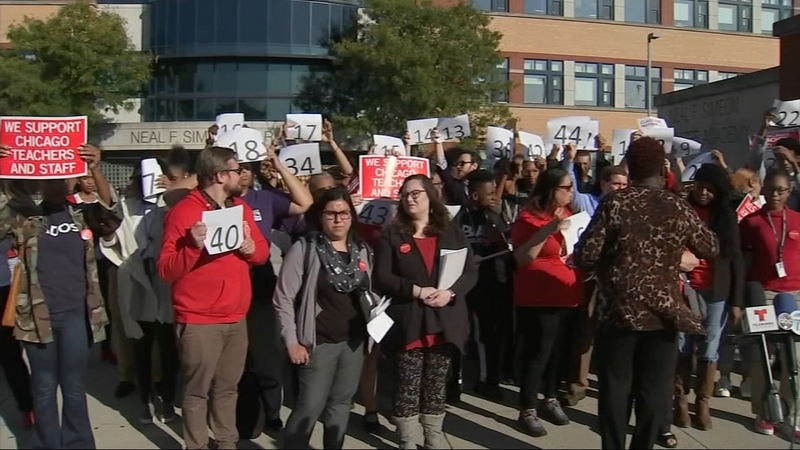 CHICAGO (WLS) -- While negotiations between the Chicago Teachers Union and Chicago Public Schools over a new teachers' contract took a break Wednesday for the Yom Kippur holiday, the union did not stay silent.

With a potential strike eight days away, CTU held a news conference at Simeon High School to talk about one of the issues that they say is holding up this whole process: class size.

Class size has been a huge issue for the teachers. CTU said its analysis shows almost a quarter of all CPS elementary students are in overcrowded classrooms.

"My largest class being 37," said Maria Aguirre, Simeon teacher. "My smallest, if you can call it that, is 32."

Neryssa Scott, a sophomore at Simeon, said she has about 37 students in her math class.

"That is a shame because today I needed help and I could get the help that I needed because she had to keep going around the classroom, trying to tell them to calm down or help others students where she couldn't help me," Scott said.

CPS responded, saying, "The district has made significant progress to minimize classroom overcrowding in the vast majority of schools across the City, and our offer makes a $10 million investment to provide 200 staff members to support classrooms experiencing overcrowding."

The union calling it a crisis and wants enforceable class sizes to be put in the contract, but said CPS won't do that. The union is also pushing for increased staffing.

"It is deeply disconcerting and troubling to me that money is being dangled in front of us and we are being asked to walk away from what looks like educational justice for our students," said CTU President Jesse Sharkey. "The teachers will not walk away from that."

The city has offered the teachers a 16 percent raise over five years. Mayor Lightfoot says that the CTU has still not provided the city with a comprehensive counter-proposal on core issues with a week away from the deadline to resolve this contract and avoid a strike.

Natasha Dunn with the Black Community Collaborative is also a parent of three CPS students. She said the teachers union is holding the school district hostage with their demands.

"I am out here because I believe this is a fair deal for now. I think the teachers union is somewhat over stepping their bounds," she said.