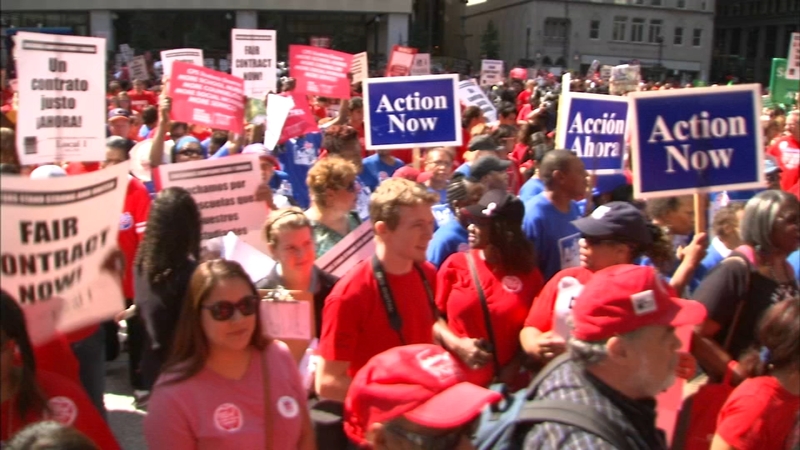 CHICAGO (WLS) -- The Chicago Teachers Union has modified some of its original proposals during negotiations with Chicago Public Schools officials Saturday.

CTU President Jesse Sharkey said that some changes have been made to the union's requests after returning to the negotiating table Saturday. But teachers could still walk off the job this Thursday, should an agreement not be reached.

In a fiery Friday press conference, the union called the latest offer from the city "insulting," as the possibility of a walkout is less than a week away. The city said it has bent over backward to get a deal done.

In a fiery Friday press conference, the Chicago Teachers Union called the latest offer from the city insulting, as the possibility of a walkout less than a week away.

If the strike occurs next week, the abrupt halt in school life will be felt acutely at Orr High School on the city's West Side.

The 4-2 Spartans football team may have their dreams of a city championship derailed by the work stoppage. No playoffs could mean no chance for many players to be seen by scouts for college programs.

Keteena Owens, a life coach with the I AM ABLE Center for Family Development, supports student athletes.

"I am hoping the strike does not happen because it affects each one of these children," Owens said. "What is the plan when they are not inside of school?"

That question was on the minds of many parents on Saturday.

"Hoping and praying they don't strike for the sake of the kids, especially the seniors," said Shantay Williams, a mother of a senior on the high school's football team. "It is the last year they have to go and show what they have to do work-wise and school-wise, but it is really hard knowing they might strike and lose out on everything they are working so hard to do."

Kevin Critcle is looking for a football scholarship. The dual threat, who plays as both running back and linebacker, hopes that both sides can bridge the gap that's preventing a labor agreement.