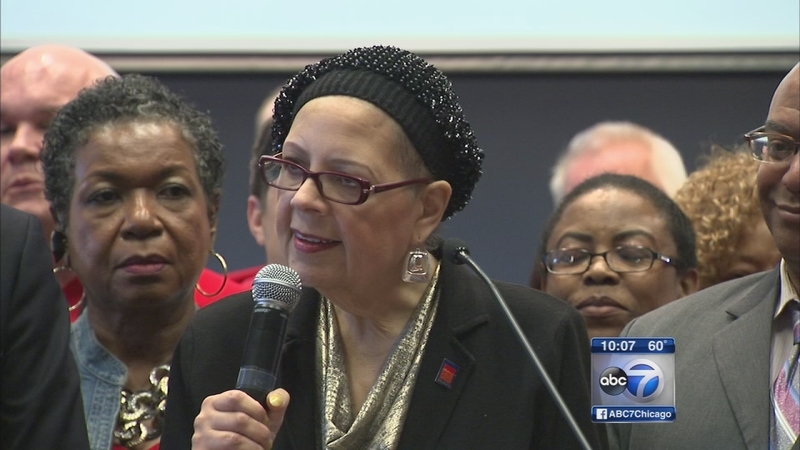 CHICAGO (WLS) -- The Chicago Teachers Union says it's taking action against the Chicago School Board over a new contract proposal.

The teachers' contract expires this summer, and while there isn't yet talk of a possible strike, the union is taking some early action.

The Chicago Teachers Union fired off its first legal salvo as negotiations with Chicago Board of Education intensify. And, as one teacher who remembers the 2012 teachers' strike, stated: "We're revving up like we did last time."

On Wednesday night, the Chicago Teachers Union blamed Chicago Public Schools and the board for mishandling money and not negotiating in good faith.

"We feel this is reactionary and retaliatory, and I guess the fuzzy sweater is gone. CPS is broke on purpose," Lewis said.

So, after six months of negotiations, the CTU filed an unfair labor practice complaint Wednesday with the state's labor relations board. The union says it's asked for a mediator three times, but the school board refuses.

"The board has to stop delaying, stop trying to subvert the process of negotiations and negotiate in good faith. They are not doing that right now," said Jesse Sharkey, vice president of the Chicago Teachers Union.

Although Mayor Emanuel and CTU President Lewis have not had a sit-down meeting, one major issue is the pension pick-up. The pick-up means the board - since the early 80s - has paid most of the teacher pension costs, and the teachers pay a smaller portion. The CTU says the board wants to end that pick-up - a move the union equates to a 7 percent pay cut.

"Our responsibility is to work together to make sure there is a pension and do it in a way so it doesn't undermine what we're doing in the classroom or in education as a whole," said Mayor Rahm Emanuel.

Lewis says she's ready to talk to the mayor.

"I'm sure there are a lot of things we can talk about that will be perfectly okay, and I'm actually looking forward to it," Lewis said.

Teachers declined to comment on-camera as they left Wednesday night's meeting. But parents are chiming in, remembering what happened in September 2012, when teachers went on strike for the first time since 1987.

"I don't think it's fair for the kids. No, no strikes," said Hattie Lowry, a CPS grandparent.

Late Wednesday, interim CPS CEO Jesse Ruiz said in a written statement: "The financial crises facing Chicago Public Schools has arrived at our classroom doors and threatens to destroy our top priority -- ensuring our students and teachers have the resources they need to succeed in the classroom. While CPS has not reviewed the complaint and is unable to comment specifically on its content, we look forward to continuing our conversations on the next contract as well as joining teachers, principals and parents to work together to increase state funding for education and reform a broken system that forces Chicago residents to pay twice for teacher pensions."

CPS and CTU are slated to meet next Thursday to continue negotiations. The union's current contract ends June 30.