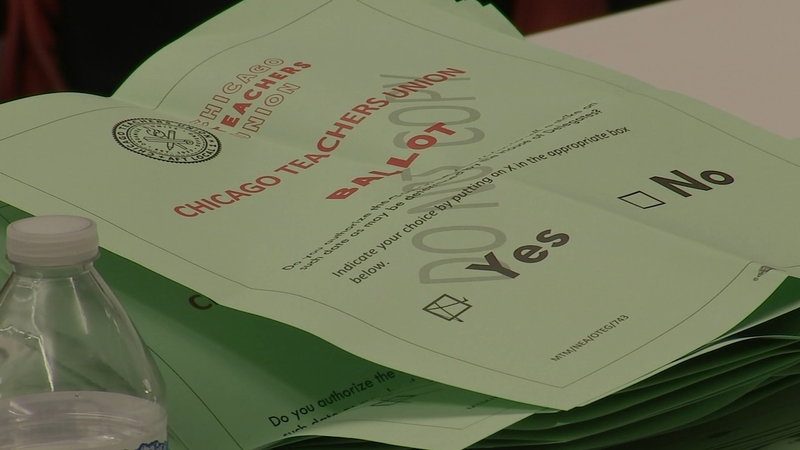 CTU votes to authorize strike if no deal reached with city

CHICAGO (WLS) -- Chicago Public Schools teachers are a major step closer to possibly walking off the job after CTU announced Thursday night its members have overwhelmingly authorized a strike if a deal is not reached with the school board.

By law 75 percent of the 24,000 Chicago Teacher's Union members must have voted yes to authorize a strike. The vote came back with 94 percent voting yes.

Voting to authorize a strike doesn't necessarily mean teachers will walk out. The two sides, the Chicago Teachers Union and the Board of Education, have been negotiating for weeks.

Friday CPS made an offer to CTU in an effort to avoid a strike, but the union said it didn't address their demands for librarians and nurses in every school, as well as the shortage of counselors and special education teachers.

The Chicago Teachers Union is reviewing an offer from Chicago Public Schools and will return to the negotiating table next week.

The union said it is reviewing the offer and will be back at the negotiating table with the city next week.

Despite vote results, Mayor Lori Lightfoot is confident a deal can be reached, even if it means using her own law background to personally sit at the negotiating table.

The last time teachers staged a strike was in 2012, during Rahm Emanuel's first term. That strike lasted seven days.

"I think there are a ton of differences, not the least of which is I'm not Rahm," Lightfoot said.

Union representatives say aside from money and benefits, they are fighting for more staffing and lower class sizes. The city has offered teachers and support staff 16 percent raises over five years.

The city maintains that some of the issues teachers are stuck on are not part of collective bargaining, nor can teachers legally strike over classroom sizes, nurses and librarians. Union members can only walk off the job over pay and benefits.

Both sides are back at the bargaining table Friday. A mandatory cooling off period is now in effect, and the earliest a strike could happen is October 7.

"Next Wednesday, our House of Delegates will set a strike deadline," Sharkey said. "That would still be potentially as much as a couple of weeks out. I think the earliest we legally can go be allowed to strike is October 7. It's unlikely to be that early, but at this point, this is coming up in the next couple of weeks. There will be a deadline and we need to make progress at the table. The mayor and her team need to put some of their promises in writing in order to secure a contract."

Some CPS parents say although a strike would be an inconvenience, they support their teachers.

"It is stressful because you don't know how long it's going to last and how it's going to impact you, but like I said I think the teachers deserve the money," said parent Brandon Thompson.

"Kids can't get the full access of the education if the classrooms are so big, so just that alone, or just having nurses, librarians," said parent Beverly Carrington. "I had all of these growing up in school."

Chicago's last major teachers strike was in 2012 and it lasted seven school days.

But the tone and issues are far different this time. The mayor then, Rahm Emanuel, had a more contentious relationship with the union than the current mayor, Lori Lightfoot, and the district's finances were shakier.