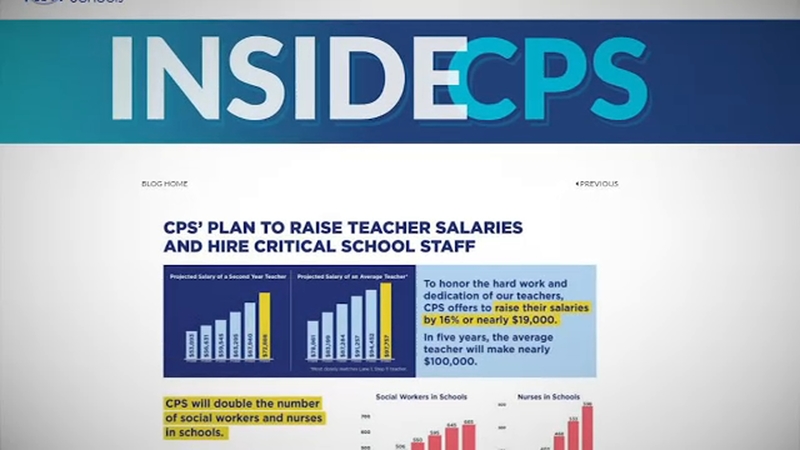 CHICAGO (WLS) -- With just one week left before Chicago Public Schools teachers possibly walk off the job, Mayor Lori Lightfoot is launching a new effort to win public support for the contract that has been offered to teachers.

The Chicago Teacher's Union is overwhelmingly voting to support a strike, and there is renewed pressure on both sides to get a deal done. The Chicago Public Schools launched a new website Monday to take their case directly to the public.

"Anyone, and hopefully teachers, para professionals, parents will be able to go to the website and look at what the sequence of events has been regarding the negotiations but more to the point, the substance of the offer," Lightfoot said.

"If she wants to do that, we can live stream tomorrow's bargaining session so those who need to know everything can know everything," said Stacy Davis Gates, the CTU Vice President.

CPS has offered teachers a 16 percent raise over five years. The CTU is pressing to get more nurses, counselors and librarians in schools and to raise the pay for para-professionals.

Both the CTU and Mayor Lightfoot said they are not concerned about public relations.

"What I'm worried about is making sure that our kids actually have a healthy and safe and nurturing environment," Lightfoot said.

"We're not playing politics or PR we want what's best for our school communities," Gates said.

With this being the first big political test for Mayor Lightfoot, getting a teachers contract done and avoiding a strike, which last happened in 2012, will be a delicate balancing act.

"Lori Lightfoot has to get past this without giving up too much because she's got several more labor unions right behind this one looking for more," Washington said. "She's got to be able to show that she's going to stand her ground and be tough."

The two sides will return to the bargaining table Tuesday.