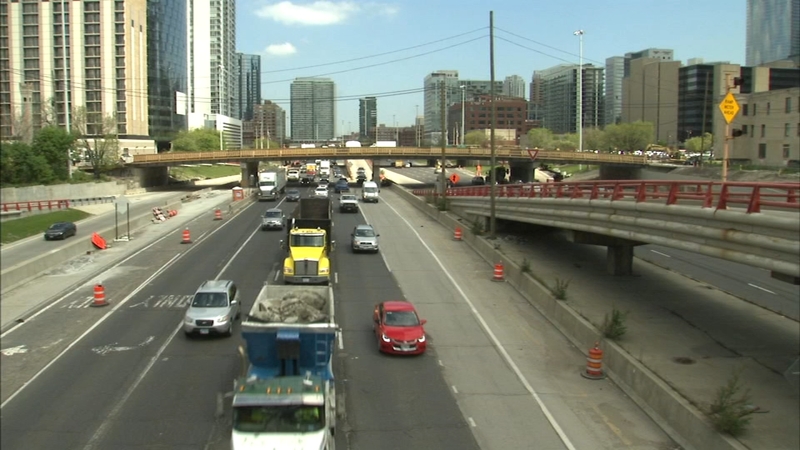 CHICAGO (WLS) -- If you drive in Illinois it costs you more than average. But just how much? Try $18.3 billion statewide, $2,559 per driver in the Chicago area.

And you don't have to go far to find why: rough and congested roads, and a lack of safety features according to TRIP, a Washington non-profit research group made up of transportation industry stakeholders.

"The lack of adequate roadway safety design, good lighting, better pedestrian and bicycle facilities, rumble strips on some roads, and better intersection design," said Rocky Morretti, director of policy and research with TRIP. "All of these can contribute to keeping people significantly safer."

Morretti spoke at a news conference at the offices of the Illinois Chamber of Commerce, where ICC official Candace Gerritsen stressed people have to care about the report entitled, "Illinois Transportation: By the Numbers."

"We encourage our legislators to take the results of this report seriously and take swift action on a bipartisan basis in a transportation modernization program in the next two weeks," she said.

The report shows Chicago drivers pay an additional $633 in vehicle costs, $387 in safety-related expenses and $1,539 in lost time and fuel due to congestion. That's how you get to $2,559 per driver. Statewide TRIP says that comes to $18.3 billion lost.

The congestion issue in Chicago is especially well illustrated at the Jane Byrne Interchange, the most congested interchange in the entire United States, according to the federal government. Some 400,000 cars come through there every day, which is why the Illinois Department of Transportation has wanted to reconstruct it for so long.

Indeed, no doubt some of you have been inconvenienced by the project, which will run until 2022, but part of the reason to do it is to save drivers 5 million hours in congestion time lost every year.

In a statement, the Illinois Department of Transportation said it welcomes a "statewide conversation on these issues and look(s) forward to working with all stakeholders on possible solutions."
Drivers are mixed on how transportation money ought to be spent, and whether there should be more of it.

"I feel like on especially Lake shore Drive I have seen so many cars stalled on the shoulder far as you know waiting for the minute men to help them so absolutely I feel the city should really look into fixing the roads more," said Carlo Calma, a driver from Rogers Park.

"For me time is money. It takes so long to get home on the train because they are packed. I like having my car," said Veronica Velez, who drives in from the north side for her job at the Chicago Sports Museum in Water Tower Place.

And John Samuel a driver from downtown summed up what many feel about this debate.

"The issue isn't increased taxes," he said. "It is efficiency of spending how the funds are being allocated and clearly they are not being allocated properly so no, no more taxes, there is enough."