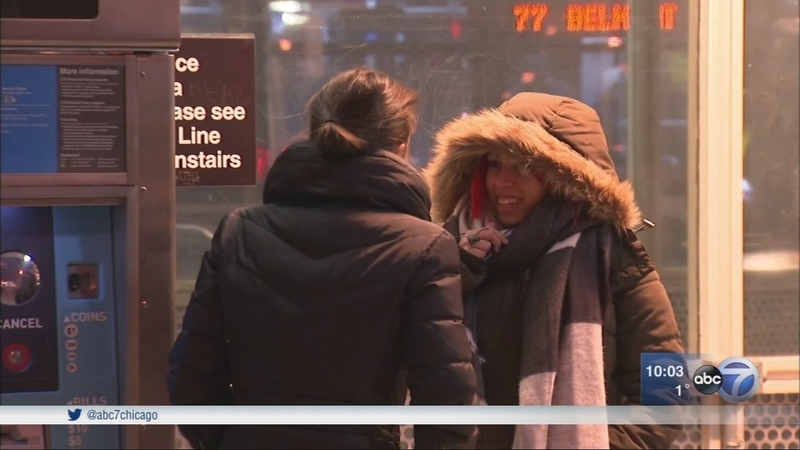 CHICAGO (WLS) -- Chicagoans are likely to be wondering why their ancestors didn't decide to settle in a warmer climate Wednesday, as frigid temperatures and below-zero wind chills blanketed the Chicagoland area.

The National Weather Service issued an "Excessive Cold Risk" for "dangerously cold" temperatures and wind chills early Wednesday, and it remains in effect for the rest of the week. There is also a possibility of snow later in the week.

Commuting in the single-digit temperatures can be the most grueling part of the day. Metra heated their tracks to make way for trains, lighting them on fire to unfreeze the rails. Waiting for the bus and even short walks outside are more than brutal.

"I have tights, jeans, joggers," said Lisette Serrano, commuter. "These boots are the warmest I have."

"Your hands, fingers, toes. It's rough on it," said Graham Maverick, commuter.

Doctors said if those tender parts are the most vulnerable to frostbite if they're left unexposed.

"Seniors are welcome in these centers every day of the year, especially on a day like today when it's cold outside. We are open and we are welcoming for seniors to come in," said Commissioner Lisa Morrison Butler, Department of Family and Support Services.

Centers like the one in Ravenswood provide a needed escape from the cold, a place to play ping pong or pool instead of freezing outside. And it's not just open to seniors.

"Not only are these centers open for vulnerable seniors, but the city makes buildings like this available in every neighborhood for any individual that's vulnerable this time of year, including individuals that are homeless," Butler said.

When it's this cold, even if you have heat it may not feel like enough.

"I had to sleep with three blankets, socks, and three shirts," said Stephanie Hayes, cold senior.

For information on Cook County warming centers outside of Chicago, people should call the Cook County Department of Homeland Security's Duty Desk at (312) 603-8185.

Chicagoans are likely to be pondering why their ancestors didn't settle in warmer climes during this week's frostbite-inducing weather.

"This morning my husband's going to work and he sees water all over going downstairs. My daughter's apartment is full of water," said Rose Bialas, homeowner. "They had their Christmas tree up, they had presents underneath, everything is gone."

The water formed a sheet of ice in the front yard, and water was everywhere inside of Bialas' daughter's basement apartment.

"You know what is to find your furniture floating in December? That's not fun. It's not a good way to wake up," Bialas said.

The Water Department spent hours working to repair the problem in the single-digit cold.

Black ice on the roads caused spinouts and crashes during the morning commute Wednesday.

The low temperatures also bring the threat of black ice, an invisible and potentially deadly threat for commuters heading home.

At Ashland Tire and Auto, the threat has kept Jack Gordon busy.

"Good tires are very, very important in this weather," he said.

Gordon said good winter car maintenance is the first line of defense in navigating snowy and icy roads, starting with inspecting your car's tires. The more wear on the tire, the more likely it is your car would spin out on black ice.

"There's only a small amount of contact patch between you and the road, and that's what holds you in place," Gordon explained.

Gordon said the cold weather has brought a steady stream of customers in for preventative work and repairs.

Experts say vehicle fine-tuning could be the difference between avoiding a weather-related accident or crashing. On I-294 at LaGrange Wednesday morning five cars crashed into each other on the southbound side. Another crash was reported on northbound Lake Shore Drive at 47th Street. No serious injuries were reported at either crash.

Temperatures at O'Hare International Airport reached a low of 2 degrees below zero Tuesday morning. The dangerously low temperatures could cause frostbite on exposed skin in as few as 30 minutes, according to the weather service.

AAA's service requests in the Chicago area were up Tuesday by 165 percent compared to the usual amount of calls, according to AAA spokeswoman Gail Weinholzer. She said most of the service requests were due to dead batteries, lockouts and flat tires caused by the cold weather.

"Any time we're coming off of a long weekend and have somewhat extreme temperatures, we always see an uptick in call volume," Weinholzer said. "We're up in service requests, but it's certainly manageable."

Trains on some Metra lines were experiencing delays during Wednesday's morning commute due to switch problems, according to the transit agency. Trains on the Rock Island District line were experiencing delays up to 25 minutes, while trains on the Union Pacific West line were delayed by up to 35 minutes. Delays of up to 12 minutes were also reported on the Milwaukee District West line.