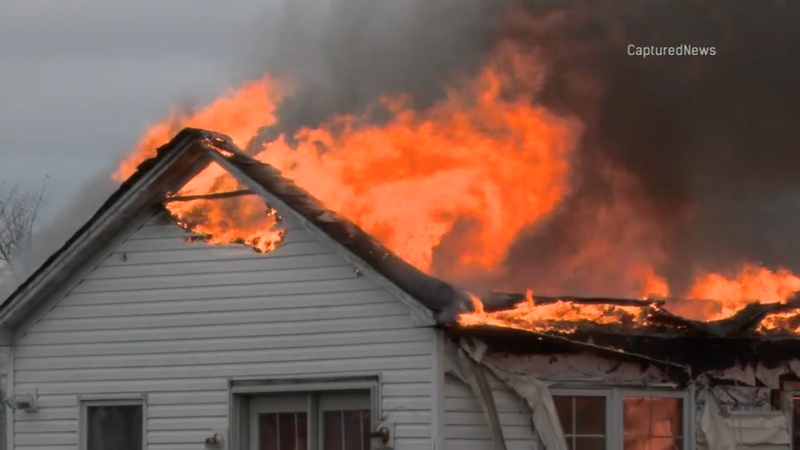 CHICAGO (WLS) -- People across the Chicago area are cleaning up after powerful winds gusting up to 60 mph caused extensive damage on one of the busiest travel days of the year.

The alert was issued due to sustained winds of 25-35 mph, with gusts of up to 50-60 mph. The winds caused power outages and damage, such as downed lights.

Strong winds gusting up to 60 mph are creating hazardous weather conditions in the Chicago area on one of the busiest travel days of the year.

ComEd crews are working around the clock to get power back on for the approximately 93,000 customers who lost it at some point during the wind storm.

As of 4:30 a.m. Thursday, ComEd reported roughly 800 customers are still without power throughout the Chicago area. Chicago's 21st Ward had the most customers affected in the city, totaling more than 270, the utility said.

ComEd worked through the night Wednesday, but they expect to return power to all remaining customers by Thursday at noon.

In the Loop, high winds led wooden debris to fall from scaffolding, damaging two vehicles and injuring a driver Wednesday as well.

Many Chicago-area residents experienced power outages on the day before Thanksgiving due to a serious wind storm.

Willis Tower issued a statement saying, "At Willis Tower, the safety of our tenants, visitors and members of the community is our top priority. We learned of an incident that took place earlier this morning outside of the tower. Fortunately, no one was seriously injured, and we are continuing to work with safety officials and ensure that the construction site is secure during periods of high wind."

"I've just seen like things flying," said Sophia Sanchez. "It's a little scary. I was trying to look to see if anything was going to fall but yeah it's really amazing how windy."

A cab driver was rushed to the hospital after a piece of falling debris hit his windshield in the Loop Wednesday morning.

Over at 18th and Canalport in Pilsen, video shows a large stoplight fall. In Chinatown, a wooden fence at Ping Tom Park appeared to have blown into a light pole.

A brick facade collapsed at a store in Alsip, while the roof peeled off another business nearby.

A house in Sauk Village was consumed by a wind-whipped inferno.

The high winds closed the Christkindlmarket in Daley Plaza and Wrigleyville at Gallagher Way on Wednesday.

UPDATE: The Christkindlmarket Chicago will be closed on Wednesday, November 27th due to high winds. Our top priority is the safety and security of our visitors. We will be open on Thursday, November 28th from 11am-4pm. Happy Thanksgiving!

The festive event is set to reopen Thursday at 11 a.m. now that winds have died down.

Even the city's building department sent out an alert warning contractors about the winds.

The high winds didn't seem to have had a serious impact on flights during one of the busiest travel days of the year.

The Chicago Department of Aviation claims wait times at O'Hare are among the lowest in the country. The agency expects more than 1.9 million passengers to pass through the city's two airports during the next seven days, which means it will be more crowded than ever.

The Chicago Department of Aviation expects more than 1.9 million passengers to pass through the city's two airports over the next seven days.

No-stress travel: How to get where you're going without the headache this Thanksgiving

One couple at O'Hare was heading to Los Angeles for the holiday and their flight was on time for takeoff.

"This is my first time flying," said Michael Moore. "We're in pretty good hands, despite the weather."

"Going to see my two boys and all of them came together for mom and my boyfriend to come to LA for the holidays," said traveler Gloria Stacker. "It's going to be good. It's going to be fun so I am looking forward to getting there and enjoying every bit of it."

Severe weather has disrupted air travel around the country.

Frank Parker from Wheaton is heading to Orlando to see his son for the holiday.

Some did get stranded overnight. Saeed Jafari Kang's flight to Michigan's Upper Peninsula was canceled Tuesday due to bad weather there, so he and his friend decided to stay up all night in downtown Chicago.

"We don't think about it because we have fun, we have kids, we have sun, we have lots of food," said Irina Krishtal. "Everything is good."

Madaline Eichers got to O'Hare early to beat the rush, heading to Minneapolis to see her whole family and excited to see her brothers.

"We're super close," she said. "One of them is about to get his degree in engineering and the other one is still going through high school so I can't wait to support them."

At Terminal 1 in O'Hare, the home of United Airlines, a company called Clear is expediting the identification part of passing through the TSA checkpoint.

The wind did start to calm down before the evening rush when hundreds of thousands of people started hitting the road, trying to get out of town for the holiday.

Thousands of drivers are flooding Chicago-area roads, trying to make their way to their holiday destinations.

"We left early because we thought there may be traffic and stuff but so far it's been good, just really windy," said traveler Melissa Moore. "We got stuck once for about 11 hours so since them we try to work around it."