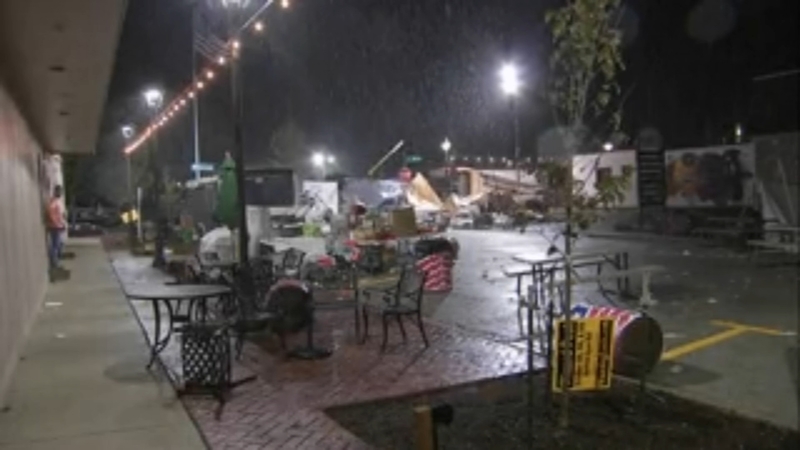 CHICAGO (WLS) -- Extremely heavy rain, strong winds and hail were behind reports of damage and flooding in the south and southwest suburbs as storms moved through Friday night.

Extremely heavy rain is falling through the south and southwestern suburbs, bringing flooding across the area. There are also risks of hail, damaging wind and lightning associated with these storms. The rain will taper off overnight but will linger into the early morning hours.

Some of the worst damage was in Manteno, where the village's OktoberFest was evacuated due to the severe weather.

Organizers issued an early warning and sent people into nearby buildings just before high winds did plenty of damage to tents and much of the setup. No injuries were reported, according to officials.

Kankakee and Will counties saw quite a bit of flash flooding, hail, and wind damage. The hardest hit areas included Joliet, Peotone and Wilmington, where police said they rescued a few stranded drivers.

The storm also produced large amounts of lightning, beginning in the late afternoon and lasting through the night.

Rainfall rates of one to two inches an hour will continue into the night, ABC7 Meteorologist Larry Mowry said.

A Flash Flood Warning is in effect for Cook, DuPage, Kankakee and Will counties in Illinois and Lake and Porter counties in Indiana until 1:45 a.m., for LaPorte County, Indiana, until 2:15 a.m. and in Grundy, LaSalle and Livingston counties until 3 a.m.

A Flash Flood Watch is in effect for Cook, DeKalb, DuPage, Grundy, Kane, Kankakee, Kendall, LaSalle, Livingstone and Will counties in Illinois and Jasper, Lake, Newton and Porter counties in Indiana until 3 a.m. Saturday.

ComEd said as of 9:45 p.m. 8,700 customers are without power due to the storms, with most of the outages concentrated in the south suburbs.
The first wave of rain began moving into the area around 10 a.m. Another round of heavy rain is expected later in the afternoon and into the evening which could bring an additional one to three inches of rain to some areas, according to ABC7 Meteorologist Larry Mowry.

FLASH FLOOD WATCH in effect until 3am for Chicago and areas west and south. Another round of heavy rain is expected later this afternoon and this evening. An additional 1" to 3" of rain will be possible for some areas. @ABC7Chicago pic.twitter.com/fb4jjwBFYL