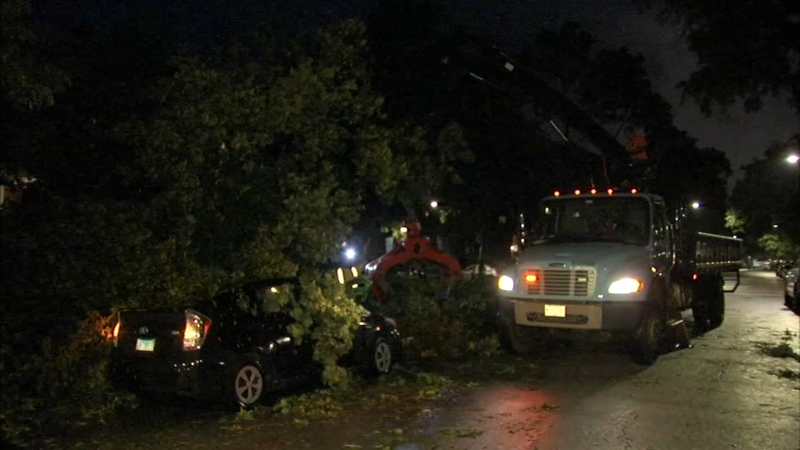 Trees downed on North Side as strong storms move through

Packing winds up to 70 mph, an intense line of thunderstorms that developed over Central Illinois barreled through the suburbs Monday evening, but weakened before reaching the city.

In Sheridan Park's landmark district near Dover and Leland, there's a mess. Some of the very old trees that surround the neighborhood's very old homes came down.

City crews ripped apart branches and cleared downed trees in Uptown, but residents said it could have been much worse. Longtime resident Troy Calkins lost a tree tonight, but had a flashback to a much nastier storm that tore through the historic district.

"When we had the derecho last year, there were two trees two buildings over that fell right on the buildings, so I feel very fortunate he said.

Tim Hamilton watched from inside his home as a 100-year-old tree came down right in his front yard.

"The tree dropped in the safest place that it could," he said. "It's not here now, but there was a car underneath it. And I'm not kidding, the tree missed the car by less than 1/8th of an inch."

Anthony Cozzi's fiance's car was not so lucky.

"We were in our house on the corner and saw that her lights, her hazards were flashing," he described. "So we came out, and were like 'that doesn't look good.' And there's a tree on top of it. It wasn't good."

It was a similar scene in Ravenswood, where crews worked quickly to clean up more downed trees.

Despite the debris, no injuries have been reported.
Earlier in the evening, the storms prompted tornado warnings to be issued near Peoria and Bloomington. One storm prompted a brief tornado warning in LaSalle County, but no touchdown was reported.

Get the latest AccuWeather forecast here


The Chicago area was under a slight risk for severe weather Monday, according to the Storm Prediction Center.
Temperatures will rise to the upper 70s Monday and continue to hit the 70s throughout the mid-week. There's another chance of rain Wednesday and Thursday.