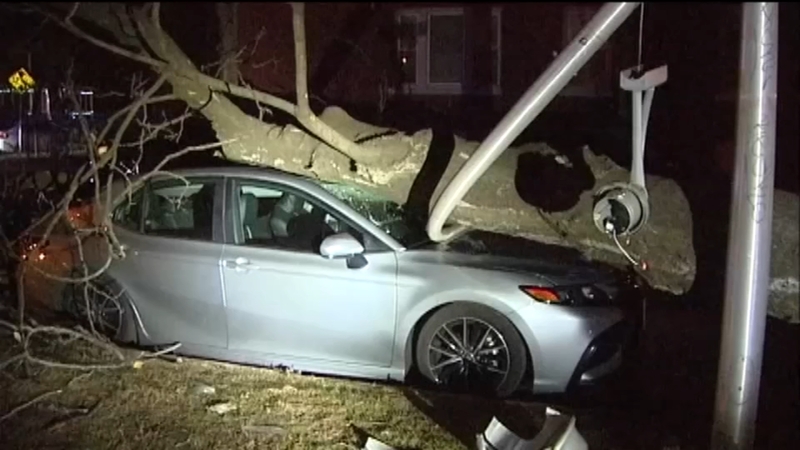 CHICAGO (WLS) -- Damage could be found across the Chicago area Thursday morning, after high winds roared across the city and the suburbs overnight.

It was still rather windy Thursday morning, but it has subsided somewhat, ABC 7 Chicago meteorologist Tracy Butler said. Winds reached up to 60 mph in Waukegan around 12:38 a.m.

The wind caused trees to fall and utility poles to snap all over Chicagoland. Over 1,100 people were without power Thursday morning, as well.

A car in the 7000-block of North Damen Avenue near Greenleaf Avenue in Rogers Park was crushed by a tree. City crews worked to remove it later Thursday morning after it fell on Melvin Cade's rental car, leaving it more like a pancake with its roof smashed into the seats.

Cade said he heard the wind howling at around midnight.

"I was sleeping, and I heard a, kinda like, a crash, but I sleep with the TV on so I wasn't sure if something was on TV," he said.

So, he went back to sleep and then a few hours later looked out his window.

"Glad I got insurance. Um yeah I was kind of glad that it was only the rental car and not someone's personal vehicle, maybe somebody who had to go to work this morning," Cade said. "Luckily I'll be able to just go to Enterprise and get another one and wipe my hands with it."

There was a similar scene at 69th Street and Oglesby Avenue, in which heavy winds snapped a tree onto vehicles.

The high winds also caused a wall and a roof to collapse in the 2900-block of North Campbell Avenue. A neighboring building was also damaged from the collapse.

"We've spent millions of dollars over the last four years to build up the property, and the roof is gone," business owner Brian Slater said. "The neighbor's building collapsed onto my roof. We got nothing left."

A house in Glenview could be seen with a tree on top of it, too.

And in Morton Grove a tent was blowing around in the parking lot of Kappy's restaurant at Dempster Street and Harlem Avenue.

There were no reports of injuries after the high winds.

Cade said he rented the now-flattened Toyota Camry to drive to a friend's funeral in Louisiana. He plans to get a new rental. He's just relieved no one was hurt.