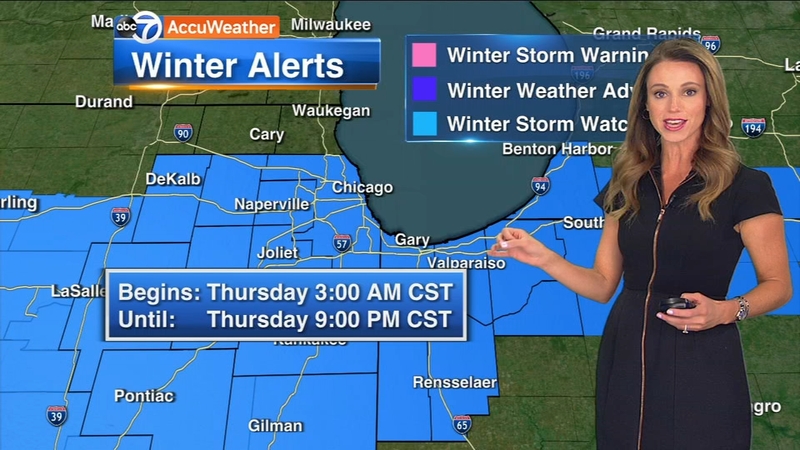 CHICAGO (WLS) -- We'll get a shot of spring-like temperatures first, but more snow is in the Chicago weather forecast this week.

The ABC7 AccuWeather Team is tracking a winter storm developing out to our west that will bring a mix of heavy rain, ice and snow to the city and suburbs this week.

The National Weather Service has issued a Winter Storm Watch in effect for the entire Chicago area, except for counties along the Wisconsin state line, from 3 a.m. to 9 p.m. Thursday. 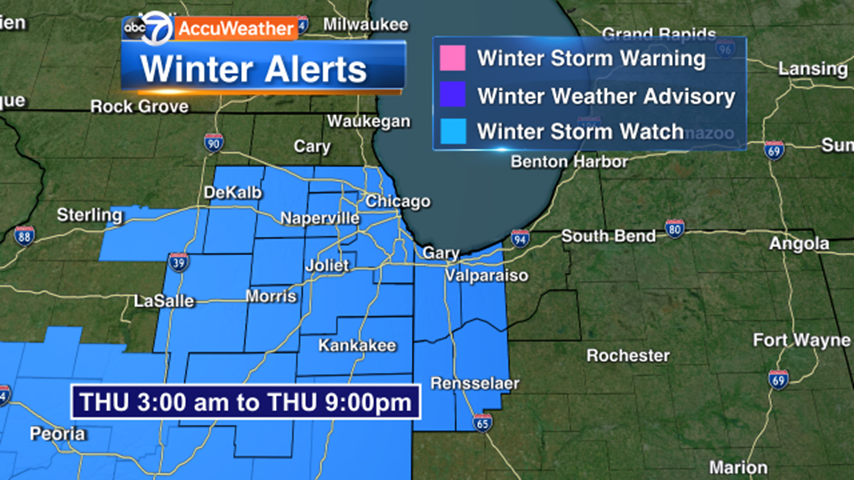 With highs in the 50s on Wednesday, ABC7 meteorologist Larry Mowry said the storm will begin as rain Wednesday evening and could lead to localized flooding. Rainfall amounts of .50 inch to 1.50 inches are possible.

Overnight, temperatures will drop to near freezing and the rain will transition over to an icy mix from around 3 a.m. to 10 a.m.

"It'll likely be a one or two-hour time frame where we get light freezing rain and sleet, but enough to put a light glaze of ice on some surfaces," Mowry said.

On Thursday morning, Mowry said the ice will transition over to a steady snow by the time the morning rush hour is winding down.

As for how much snow we will get, Mowry said there is still a lot of disagreement between computer models. The European weather model is showing lighter accumulations in the city with the heaviest snow falling south of I-80. On the other hand, the American model lifts the heaviest snow further to the north, with the highest accumulations in the city.

While it's still too early to determine which model is more likely, Mowry said at this point, he believes the heaviest snow will fall across the city, south suburbs and Northwest Indiana.

"Anywhere from 4 to 7 inches from around the city to the south side, lower totals north and lower totals down in parts of northwest Indiana," Mowry said.

Stay tuned to ABC7 Eyewitness News and ABC7Chicago.com for the latest updates on the snow storm.