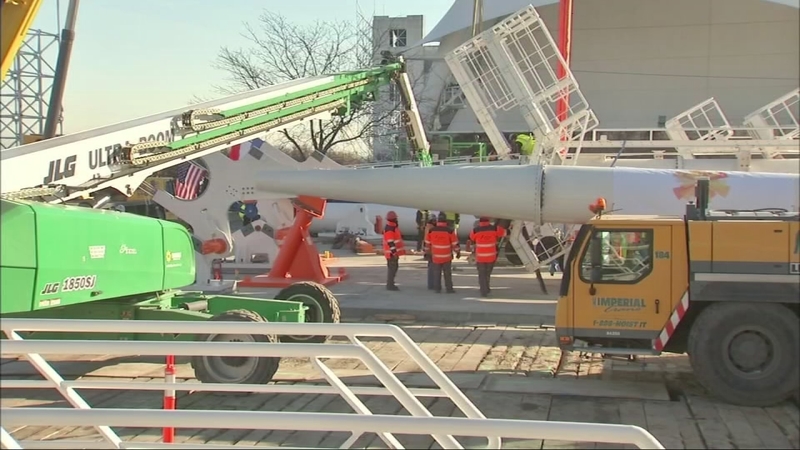 CHICAGO (WLS) -- It's still brutally cold in the Chicago area, but things are looking up. Temperatures by Tuesday afternoon had doubled compared to Monday.

ABC7 Meteorologist Cheryl Scott said temperatures are hovering in the mid-teens with O'Hare producing the high of 17 degrees, and wind chills have died down.

There is a chance for some snow throughout the area, though the bulk and heaviest of the snow will likely stay to the south says Scott. Light snow showers are expected to move in after 10 p.m. The heaviest snow, which will be moderate at best, will fall south of the city. Snow is expected to end before the Wednesday morning commute.

Make sure to dress in layers Tuesday and wear a hat, gloves and boots to protect against frostbite. People should check for redness on their cheeks or if their fingertips turn white. Those signs could indicate the development of frostbite.

"In this kind of weather, definitely wear layers. Definitely cover exposed areas. If you have any wet clothes on, definitely take them off and put on dry clothes. That would be the three keys for cold weather like this," said Dr. Christopher Beach, Northwestern Memorial Hospital.

Many people who live in Chicago and its suburbs said due to a relatively mild winter so far, the bitter cold can feel like a shock.

"We've been spoiled of late, which makes it feel worse than it is," said Randall Flagg, who lives in Naperville.

WORKING THROUGH THE COLD

Despite the frigid cold, crews began work on the new Ferris wheel at Navy Pier, which is closed to the public Tuesday and Wednesday.

"We've got heaters out there. We've got some warming rooms on both sides of the work site. We're bringing up some coffee," Murphy said.

The new Ferris wheel is expected to open to the public Memorial Day weekend. As of noon Tuesday, there were no weather-related problems.

The same could not be said for an AT&T store in the Loop. A pipe burst overnight at the State Street store. Icicles were hanging from light fixtures and fortunately workers could stay inside to clean up the mess.

That was not the case in north suburban Morton Grove. Crews had to dig a trench in the single-digit weather to fix a water main break.