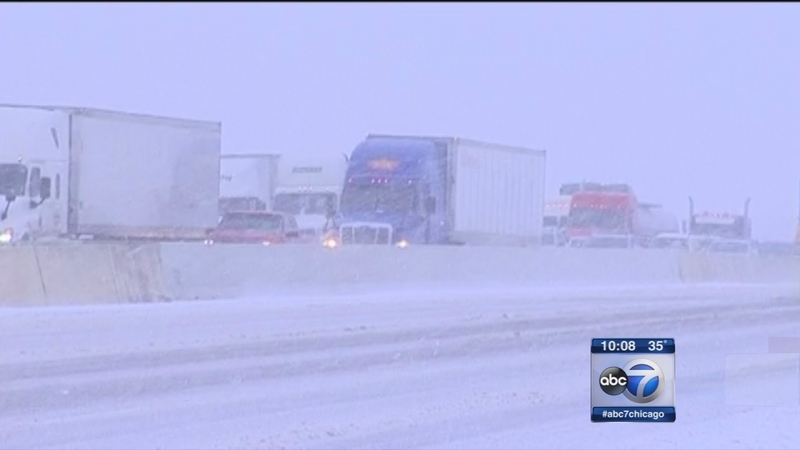 CHICAGO (WLS) -- A winter storm brought a mixed bag of precipitation and blizzard-like conditions to the Chicago area Monday. The storm created icy conditions on roadways, high waves on Lake Michigan and chaos at the city's airports, where nearly 1,700 flights were canceled. 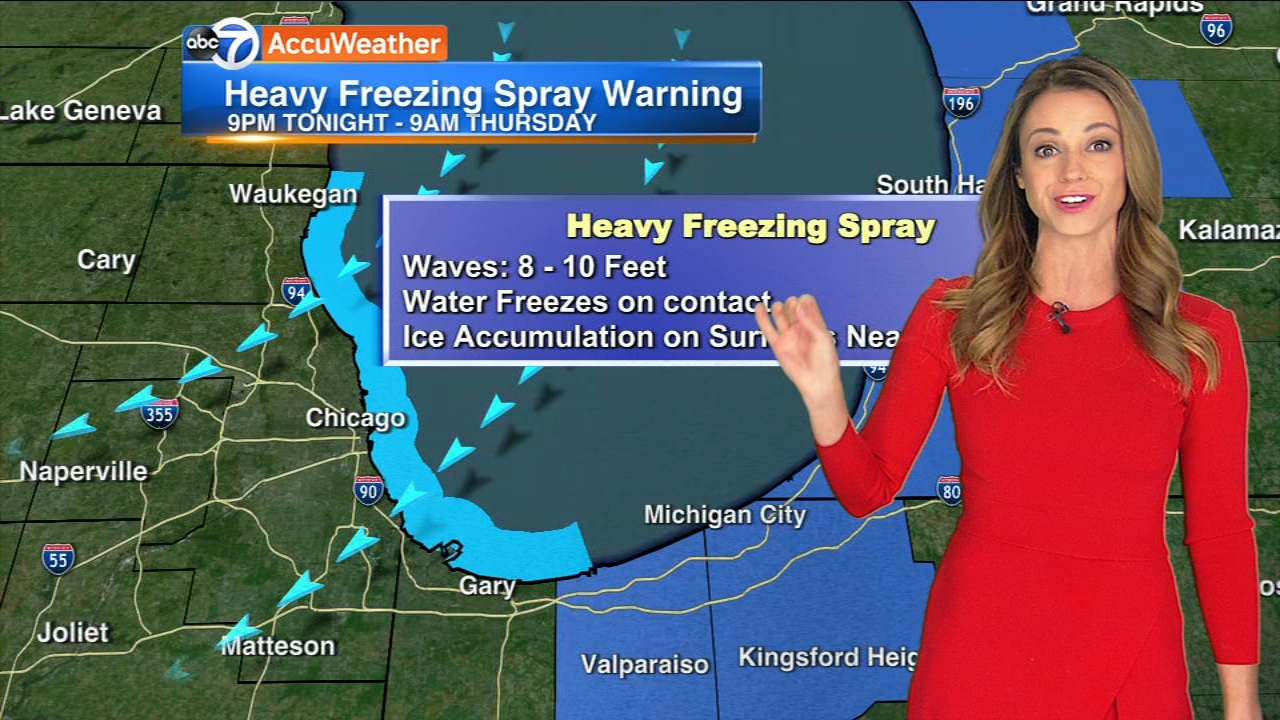 Freezing rain and sleet have transitioned to rain as winds pick up across the Chicago area Monday evening, ABC7 Meteorologist Cheryl Scott said. Sustained winds will be between 35-45 mph, with gusts up to 60 mph.

A Lakeshore Flood Warning is in effect until midnight for Cook and Lake counties. ABC7 Meteorologist Troy Christensen said winds gusting up to 60 mph along the lakefront are causing waves 15-20 feet high.

OVER 1,700 FLIGHTS CANCELED AT CHICAGO AIRPORTS

At Chicago's airports, travelers were left stranded on Monday when airlines canceled nearly 1,360 flights at O'Hare and 300 flights at Midway. 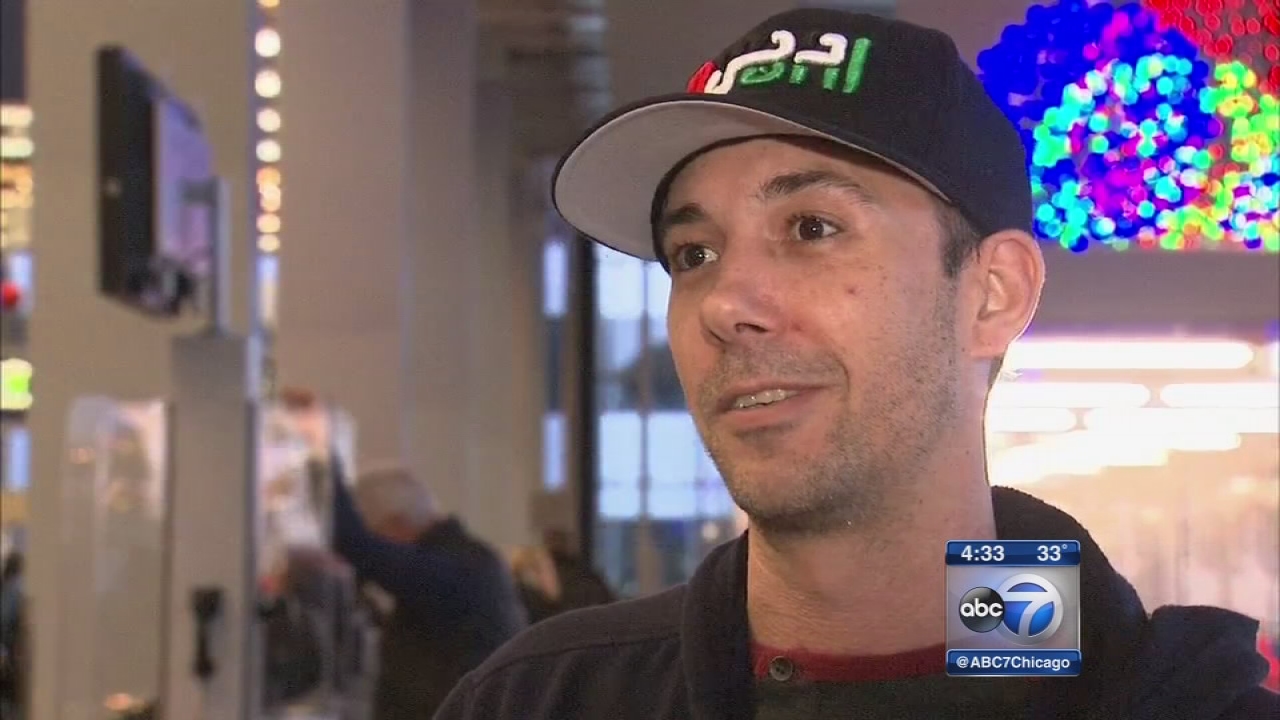 As of 10 p.m., passengers at O'Hare were experiencing delays of two hours or more for all inbound and outbound flights. Many passengers simply gave up and decided they were going to rent a car or book a train ticket. The problem was many had already checked their luggage - and getting it back was an ordeal.

"At this point, there's no flights they said until almost Wednesday at the latest, or even maybe Thursday," said Matthew Vitara, who was stranded at O'Hare.

At O'Hare, the re-booking line wound around and stretched across half Terminal 1 Monday night. But that paled in comparison to the line in baggage claim, where travelers whose flights were canceled waited three hours to get their luggage back.

"I have never seen a line like this. I have been traveling pretty regularly for five, 10 years now, and this is ridiculous," said Nicole Riggs.

"We wanted to drive home, and so they won't let reclaim our property, and we can't leave the airport obviously," said Joe Martin.

The scene at Midway was also chaotic, where Southwest Airlines canceled 60 percent of its departing flights. In all, more than 300 flights were canceled at Midway on Monday.

The Illinois Department of Transportation sent out most of their trucks around midnight to get ahead of the storm. Chicago's Department of Streets and Sanitation said Monday afternoon it had deployed its full fleet of more than 300 snow plows and salt spreaders to Lake Shore Drive and other main streets. By Monday night, their focus had shifted to the city's side streets. 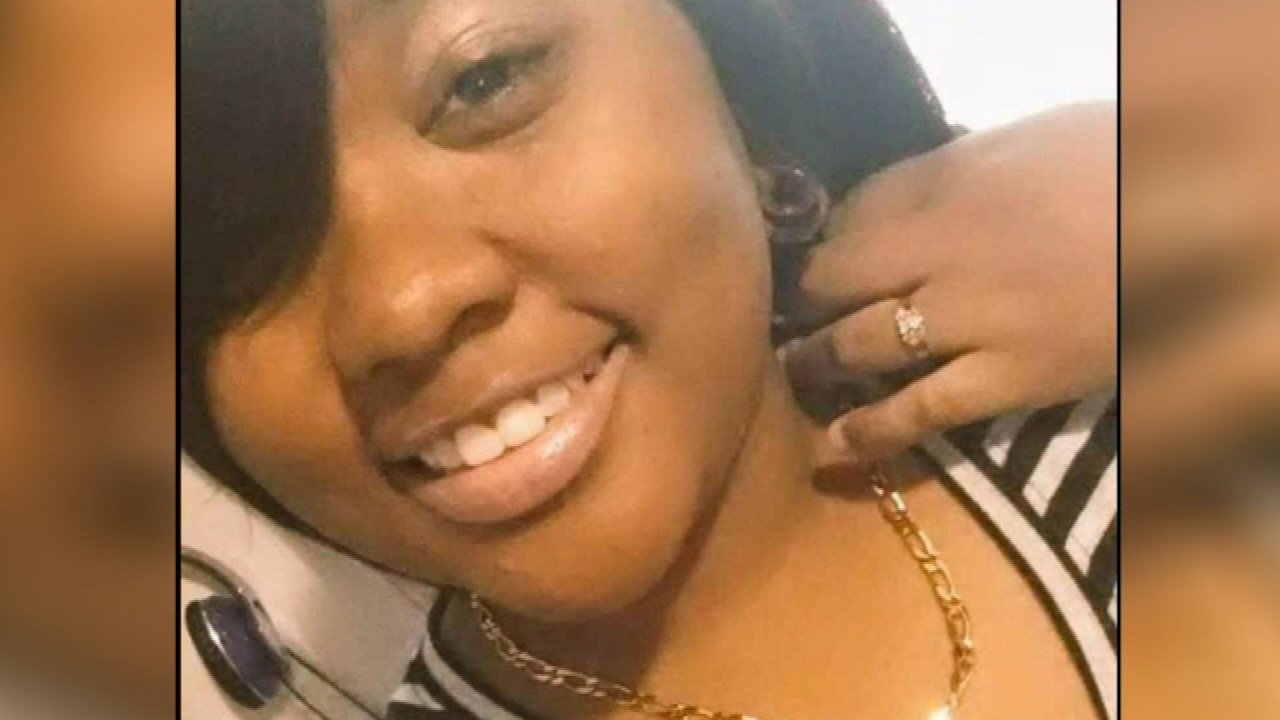 The treacherous road conditions snarled traffic as well. At the Greyhound station in downtown Chicago, many travelers planned to stay over Monday night.

"They don't have a clue when we're leaving, and nobody can tell us anything. We said what, we're supposed to sleep in here tonight? And they said well, we guess so," said Darrin Miller, a bus passenger.

The northwest suburbs got the worst of the storm. Woodstock dispatched all of its 11 public works crews early Monday morning to stay ahead of the weather.

"With ice, you have to get out actually ahead of time to get material down to prevent the ice from bonding to the road," said Tom Migatz, assistant director, Woodstock Public Works.

Blizzard-like conditions were reported on I-94 in Lake County, where there were several accidents and spin-outs throughout the day.

The gusty winds downed power lines at the intersection of Route 41 and Lake Shore Drive in Woodstock. Further north in Delavan, Wis., high winds brought down a gas station canopy. Firefighters said two people were pumping gas at the time, but luckily, no one was injured.

From Stacy on Facebook: the nearest gas station canopy is down. Delavan roads are nasty. #WIWX pic.twitter.com/LaG3gX9rqr

The winter weather also likely played a role in a roof collapse in the southwest suburbs. Police and firefighters responded to the collapse at the First American Trading Company in Bedford Park, just a few blocks south of Midway Airport. Nobody was inside at the time.

At the height of the storm, ComEd reports that more than 40,000 customers across the Chicago area were left in the dark. So far, the utility has restored power to about 15,000 and said 300 additional crews called in from Baltimore and Philadelphia are out assessing damage and making repairs. ComEd said anyone who comes across a downed power line should immediately call ComEd at 1-800-EDISON1 (1-800-334-7661) or access our website at ComEd.com and report the location; also, never approach a downed power line.