WLS
By Cate Cauguiran, Will Jones and Alexis McAdams 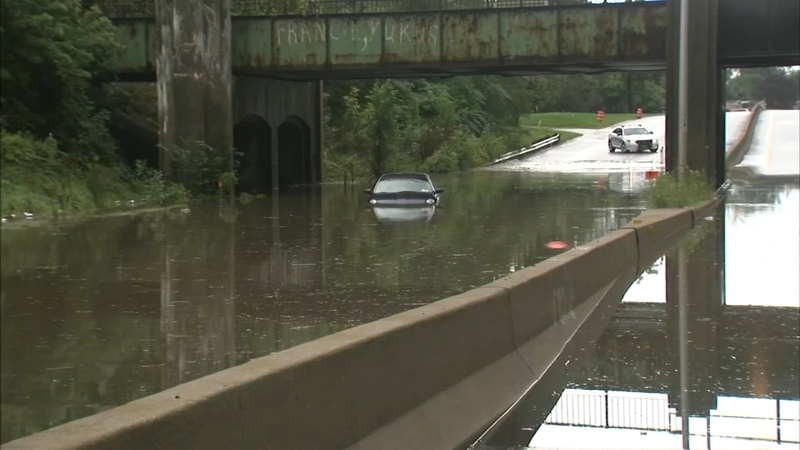 The heavy rainfall caused major issues in Waukegan, with homes surrounded by water and cars turning around with roads blocked off.

Fire crews carried a boy and a woman to safety and also removing cats and dogs from the homes as the water made its way into homes. Several feet of standing water have shut down access to some main roads in the county.

Heavy rain overnight has led to flooded streets in the north suburbs, and some cars and even a school bus were seen driving through high standing water.

Neighbors called 9-1-1 as the water continued to rise, knocking out a basement wall.

"I heard it creaking and creaking and all of a sudden the whole thing just came loose," said homeowner Daniel Limon.

Heavy rain in the northern suburbs led to some flash flooding Friday morning, forcing firefighters to rescue some from floodwaters in Waukegan.

Limon and his son crawled out of the bathroom window to escape.

"I saw the whole thing come down and the water rush in," Limon said.

Several feet of standing water have shut down access to some main roads in the county. Motorists are warned not to drive on flooded roads and to turn around when they encounter floodwaters. The flooding has led to street closures across the north suburbs, with some cars and even a school bus seen driving through high standing water.

Tracy and Diane break down the impact of the heavy rain on the morning commute Friday morning.

"When you have that much water with that amount pressure coming through, it just cannot happen,"

WATCH: Residents at the Harbor Place apartment complex in Waukegan are dealing with flood damage after strong storms left water covering the first floor. The basement is full of water. @ABC7Chicago pic.twitter.com/GLIrOekUal

Residents at the Harbor Lakes Apartment Complex woke up to the fire alarm.

"We came out thinking there was a fire but it was actually the basement which was flooded enough that it was touching the alarm so it set off the alarms," said one resident.

In McHenry, city officials said they did get a good amount of rain. However, compared to Thursday, it was much less and over a longer period of time.

McHenry police and the public works department said the challenge Friday is a matter of playing catch up and keeping an eye on water on the roadways.

"We did have a significant amount of rain that was followed up by a lot more rain so just trying to catch up and make sure that the roads and detours are set up in a safe way, we're just trying to keep on top of that," said McHenry Police Officer Patrick Polidori.

"It is a waiting game at this point," said Troy Strange, director of public works for the city of McHenry. "We're limited in terms of the capacity of the streams."

City leaders said the flooding Friday is localized to the east side of Route 31 and in neighborhoods in the northwest corner of town.

Police and the public works department said they anticipate water levels here to go down in time for the evening commute.

The heavy rain ended later Friday morning and the afternoon should be sunny with highs in the upper 70s.

Severe weather Thursday night prompted a tornado warning for DeKalb, Kane and Kendall counties after radar-indicated rotation, but no funnel clouds or touchdowns have been reported.

Students at Northern Illinois University in DeKalb posted video to social media of them taking shelter in a dorm hallway during the warning, captioning it "We love a good tornado in new hall west."