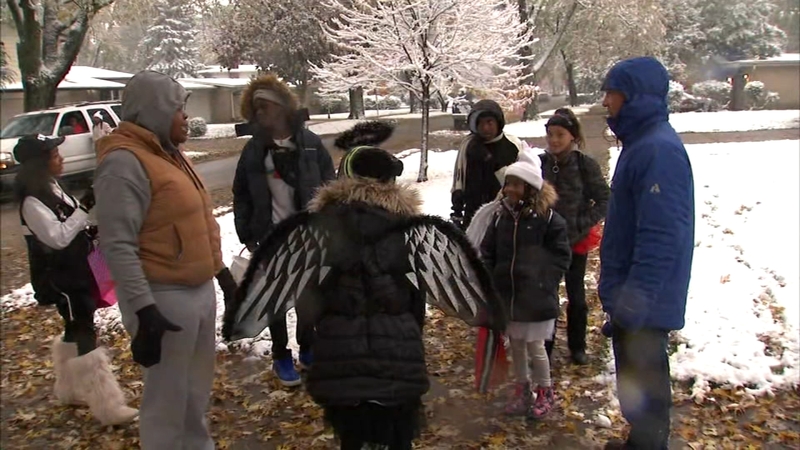 Snow on Halloween forces some activities indoors, some trick-or-treaters persevere

Measurable snow fell across the Chicago area, which also had unseasonably cold temperatures.

Trick-or-treaters bundled up to try to stay warm, but on this spookiest of days it was going to take more than a few inches of snow to scare them off from collecting their bags full of candy.

In south suburban Glenwood the kids seemed to be having fun but the adults, not so much. Still, kids bundled up over their costumes and carried on.

"They're wearing four layers," said Gwendolyn Holt with a laugh. "They have on four layers, including their coat and their hat."

For others, the surprise snow had them rethinking their plans.

In South Barrington, the halls of an elementary school were lined with ghosts, goblins and superheroes. The annual Halloween parade usually takes place outside around the school, but not this year.

Parents lined the halls as well to snap pictures of their kids in costume. This may be their only opportunity, since they will likely be bundled up in coats, hats and gloves before heading out trick-or-treating.

At the Homewood Metra stop arriving commuters broke out their snow brushes a little early this year.

"I put it in the trunk the other day just because they said it might snow, but I didn't think I'd be using it," said Cheryl Thompson.

Road conditions were treacherous in Kane County, and one driver ended up in the corn.

"I hit some slush and spun around here into this beautiful cornfield," said Dennis Hayes, driver.

Plows in Algonquin have been going since 3:30 a.m., first salting the roads and then, later, actually putting the plow down and pushing measurable snow off the roads. That's not normal for October.

IDOT officials warned commuters to watch for black ice and slick spots, especially when travelling over bridges and around corners.

The weather has led to some cancellations at Chicago's airports. As of around 3 p.m., 184 flights have been canceled at O'Hare and 126 at Midway.

The average flight delays at O'Hare were around 83 minutes, while Midway's average delays totaled 22 minutes.

The sight of pumpkins covered in snow was not the sight many wanted to see this Halloween in the northern suburbs.

The Elgin Department of Public Works equipped their trucks with snow plows and salt spreaders for the season's first winter weather advisory.

"We just completed our week one of leaf collection and now we are out plowing snow on Halloween," said Elgin DPW Superintendent Aaron Neal. "It is tough out here to the DPW in Elgin."

There will not be much accumulating snow because the warmer pavement temperatures.

"The streets won't get the snow because the pavement is 32-33 degrees," Neal said.

Dozens of salt and plow trucks across the Chicagoland area are focusing on de-icing bridges and overpasses, which freeze more quickly.

"We are making sure our intersections are safe and we will do that for the afternoon," Neal said.

Drivers took their own precautions.

"I always drive slower and make sure to watch my stopping distance," said driver Amanda Zaccari.