Chicago Weather: Rising temperatures expected to cause burst pipes, some flooding over weekend 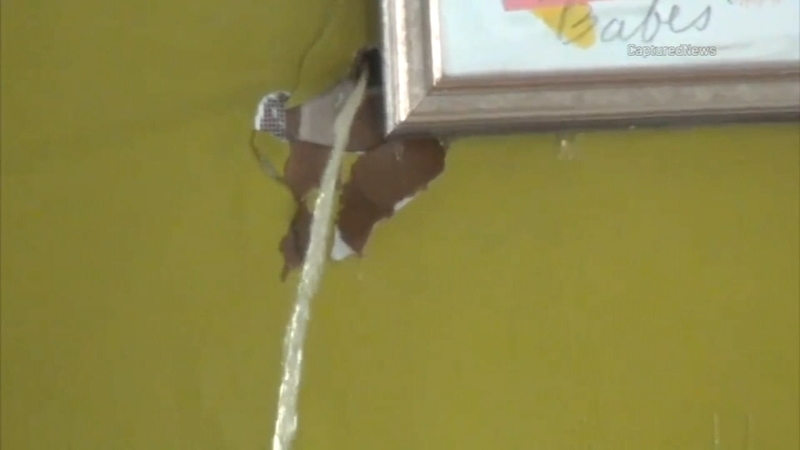 CHICAGO (WLS) -- Temperatures warmed up Friday after two days of extreme cold, and they'll keep getting warmer through the weekend.

Friday's high was 22 degrees after two days of subzero temperatures and wind chills as low as -50 degrees. Temperatures at O'Hare were below zero for 52 consecutive hours.

Temps will continue to rise Friday night, through the weekend and into next week with highs in the upper-30s, mid-40s and even low-50s on the horizon.

But the rising temps are causing some heretofore unforeseen plumbing problems for homeowners and businesses across the area.

For some homeowners, the weather brought a double whammy. Maureen Joiner's problems began Monday when water seeped into her home because of a buildup of ice, called an ice dam, which can trap water on the roof.

"It'll first saturate like your attic insulation, and eventually it can cause a whole ceiling to collapse," said Joe Mann, SteamIceDamRemoval.com.

Professionals removed the ice damn using steam, but that won't fix her other problem.

"I was upstairs, and I heard a pop. And then I turned, and I saw, like, a tsunami of water racing across our master bathroom," she said.

A pipe burst, sending water streaming from upstairs down to her kitchen.

Contractors are expecting a flood of similar calls this weekend.

As the temperatures start to rise above freezing, homeowners and businesses are unearthing bigger unforeseen plumbing problems.

In Arlington Heights, staff at a pizzeria started their work day with a broken water pipe in the wall and three feet of water gushing into their dining room.

In Des Plaines, plumbers had to cut through Ron Schultz's home to fix pipes that burst after a line froze.

Schultz said bad wiring caused the boiler to shut down, so he fixed the wiring thinking that would solve the problem. He didn't know about the damage done in the time the boiler was down.

"It caused the pipes to freeze, not only the heating system but the domestic water too," he said.

"You don't notice it when the temperatures are, you know, close to median, but when we get these extreme temperatures all the problems are exasperated," said Shawn Kinnear, plumbing technician with Perfect Home Solutions.

Kinnear said pipe problems like this will be a bigger issue for many homeowners during the extreme temperature changes.

"As things thaw out, people have frozen lines, they don't have service out of one faucet then all of a sudden you end up getting ruptured pipes from the thaw out," he said.

Kinnear said he and his colleagues are on standby, anticipating a higher call volume as the temperatures rise.

And Schultz said despite his problems, he's just happy he didn't leave for his scheduled trip to Florida.

"Could you imagine if we were in Florida and nobody checks the house, when you come back two months later it's probably not here, it floated over to Wolf Road," he said.

"It was like a sheet of glass," said truck driver Cory Johnson. "It looked like it was just wet road but it wasn't. It was ice."

Johnson passed the crash while driving west on I-94, where roads weren't much better.

A 12-vehicle pile-up near Michigan City and a different semi crash on I-65 caused delays too. Northwest Indiana had the worst conditions, but there were spin outs reported all over.

But neighborhood streets were still slushy as the morning commute peaked.

Meanwhile in south suburban Wilmington, the extreme cold resulted in a seven mile ice jam on the Kankakee River.

Meanwhile in south suburban Wilmington, the extreme cold resulted in a seven mile ice jam on the Kankakee River. Officials said some low lying areas have experienced some flooding from the ice buildup. The ice is expected to thaw this weekend and combined with rain, could lead to flooding.

The extremely cold temperatures punished the rails this week and Friday, Metra is trying to get back on track. Regular schedules resumed on almost all Metra lines. For the past few days subzero temperatures bought many trains to a halt due to rail breaks and other damage caused by extreme cold.

"I've been lucky enough to get rides to work for two days," Metra commuter Christine Campbell Mulhern said. "Either my husband took me back and forth, he's retired, or I went in with co-workers."

Metra's BNSF line from Aurora to Chicago dealt with switch problems Friday morning. Some inbound and outbound trains operated 10 to 20 minutes behind schedule, and many riders grumbled about the delays.

"Train was late this morning," said UIC student Maheen Khan. "It was 20 minutes late. It wasn't too bad, but it was freezing."

Service was still suspended on the Metra Electric line Friday. Damage to the train's overhead power system caused by frigid temperatures and a freight train derailment Wednesday night were still causing problems that Metra hopes to resolve this weekend.

"I know it's difficult for trains and the tracks and the crew and I think Metra has done, at least on the Burlington Line, a pretty decent job," said Metra commuter Pat Nicholson.

Most Amtrak service also returned to normal Friday. However some trains in and out of Chicago will experience some delays.

AIRPORTS RECOVER AFTER COLD CANCELLATIONS
Delays and cancellations remain at Chicago's airports. As of 9:30 p.m., O'Hare had 203 flights cancelled, with another 15 cancelled at Midway, but things are getting back to normal after thousands of cancellations from the previous days.

The snow has led to some school cancellations across the area. Click here to see a full list.