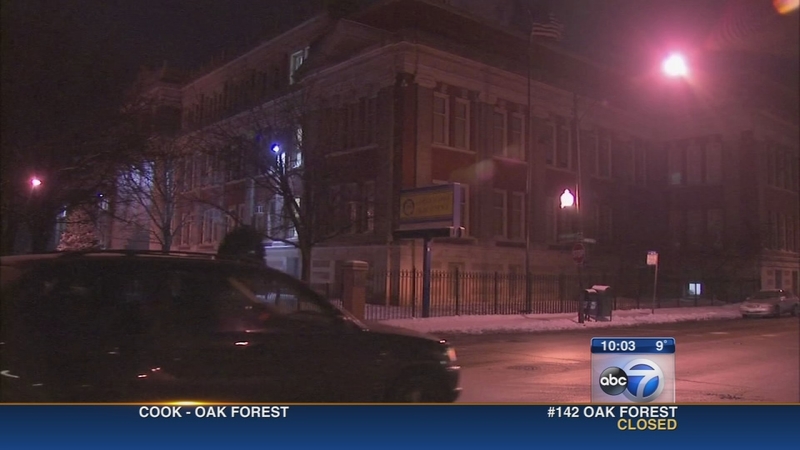 CHICAGO (WLS) -- Chicago Public Schools announced they are cancelling classes Wednesday because of sub-zero wind chills and extreme cold moving through the Chicago area, and the dangers the weather presents to children traveling to and from schools.

"The safety and well-being of our students comes first," said CPS CEO Barbara Byrd-Bennett. "The frigid temperatures and winds make a dangerous combination, and it is in the best interest of our students to cancel classes."

CPS buildings will remain open and will accept students who still arrive at schools. CPS administrative staff, building engineers and custodians will be at work tomorrow. Parents with questions can reach CPS by calling 773-553-1000.

Several schools in the suburbs will also be closed, including in Waukegan, where a month-long teachers strike extended the school year. Wednesday won't need to be made up, though, because of the strike.

"We exhausted all of our emergency days, so (Wednesday) will be considered an "act of God" day, and we'll have the option to use that in consulting with the regional office of education," said Nicholas Alajakis, Waukegan Public Schools.

To encourage kids to stay indoors Wednesday, several sledding hills will be officially closed. But there are indoor attractions. The John G. Shedd Aquarium and the Museum of Science and Industry are offering free admission Wednesday for Illinois residents.

For a full list of school closings in the Chicago area, visit ABC7's School Closings page.

For families seeking alternative youth program and services, the Chicago Public Library and all Chicago Park District facilities will be open during their normal operating hours on Wednesday.

Metra officials implemented a number of changes to avoid major service disruptions the rail system experienced during last year's polar vortex. The small amount of snow that fell overnight has helped avoid a number of problems that plagued the commuter rail last winter.

Fuel trucks are stationed at outlying Metra rail yards and service crews are on hand. Train engines will run all day and gas-fed flames will keep switches warm at crossovers, which will be manned 24/7 to make sure they remain fully operational.

"We are very concerned and that is why we are at full winter staffing level," said Metra spokesperson Meg Reile, "and people are at points for 24 hours, because the cold is a concern for us. We are going to try to run a normal rush tomorrow, but like this morning there will be a chance of some delays and some of them will be weather related."

As temperatures continue to fall, the Illinois Department of Transportation is working around the clock to keep roads clear and salted. IDOT officials say most of the accidents during the morning commute were caused by people driving too fast for the conditions and asked commuters to slow down.

IDOT is also warning about the dangers of black ice, which is becomes more widespread as temperatures fall. Officials say it's easy to spot snow on the road, but patches of black ice are harder to see and far more dangerous. They are asking drivers to reduce their speed during the evening commute.

"Drive responsibly. Be wary of slick pavement. Snow is easier to see than ice. No texting and driving. Don't crowd the plows and slow down," IDOT's Carson Quinn advised.

Chicagoans can track the city's snow plows in real time at www.chicagoshovels.org.

The National Weather Service said a Wind Chill Warning takes effect at midnight and lasts through noon on Thursday.

A city ordinance requires landlords to maintain certain heat levels in rental units between Sept. 15 and June 1. Temperatures should be at least 68 degrees during the day and 66 degrees at night. If a landlord does not comply, call the city at 311.

Fluctuations in the temperature can put stress on old, cast-iron pipes. To prevent residents pipes from freezing, the city said to try running a trickle of water while temperatures are so low. Wrapping blankets around exposed pipes and allowing warmer air to circulate near them are also good tips. If a pipe does freeze, never use an open flame to thaw it. Use a heating pad or hair dryer instead. If residents lose water service or see a leak from a broken main or service pipe, the city said to call 311.

The weather is expected to warm slightly over the weekend. High temperatures may reach the mid-20s and some light snow is possible.