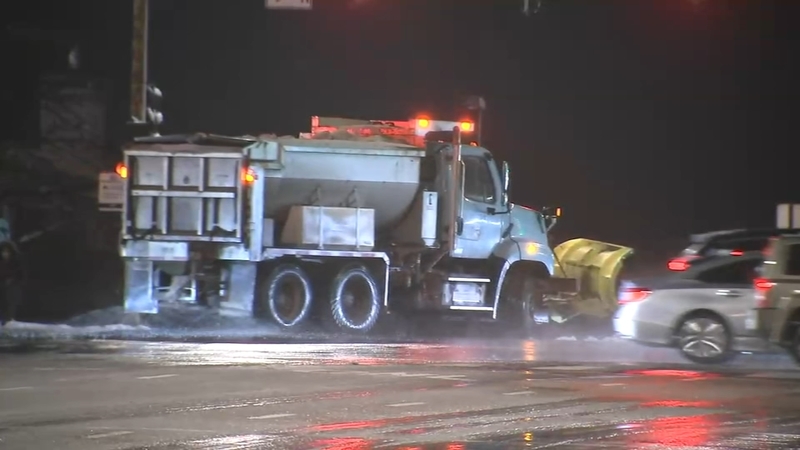 CHICAGO (WLS) -- A deep freeze is moving into the Chicago area following another round of snowfall that is sure to slicken streets and make for treacherous travel.

Hard and fast snow started falling around 1 p.m. Thursday, and lasted until about 7 p.m. The heaviest snowfall is over, though flurries are expected to continue later into the night. Those flurries shouldn't add much accumulation, but there is still a lot of snow left over from last week.

About 2 to 5 inches of snow was expected across the Chicago area, with some higher totals north.

Snow ends Thursday night, but bitter cold air had already arrived by 7 p.m. With winds up to 45 mph, blowing snow and frigid wind chills will be a problem. Lows below 0 are forecast, with wind chills making it feel colder than it has in two years, since the last polar vortex.

The one-two punch is what worries most residents.

"Once it's frozen, you're stuck," said Kristen Hulne, owner of Patch Landscaping and Snow Removal.

"Well tonight, you know, just leave everything salted. It's going to freeze a little bit later on tonight," said Ernesto Cervantes, who was salting city streets.

"It's really heavy right now, but you can actually move it," said Brian Dolan, who lives in Wicker Park. "Whereas when it freeze, it'll be a block office and just breaking it up is gonna be exhausting."

ABC7 Meteorologist Larry Mowry said starting Friday, temperatures won't climb above freezing for at least 10 days, and possibly even the next two weeks.

Chicago's Department of Streets and Sanitation said it has made repeat trips down residential streets this week to make a wider path ahead of the expected harsh cold spell, but some drivers clearly still struggled on city roads Thursday. The problem is likely to get worse this weekend.

City plows kept up with the snow near Lake Shore Drive, and Streets and Sanitation crews tried to get down as much salt as they could before frigid temps arrived.

Fast-falling snow and a deep freeze made for treacherous travel Thursday.

The quickly plummeting temps plus the new round of snow means treacherous travel is a real possibility and concern. Despite the fleets of snow plows and salt trucks, transportation officials across the Chicago area are asking drivers to be sure they plan for extra time, leave plenty of distance between vehicles, and take precautions as roads become slick.

The wind started to kick up after 8 p.m., enough to make drivers really grip that steering wheel to stay in their lane. At the height of the storm, thick wet flakes reduced visibility.

"You got cars sometimes, you see them speeding on down the way, and you're like, I'll see you in just a little bit, and there they are on the side of the road," said truck driver Steven Serfoss.

Waukegan deployed their fleet of nearly 40 trucks affectionately known as "The Snow Fighters," who plan to be out for about 10-12 hours clearing snow, because once the arctic temperatures arrive, everything's going to freeze to the pavement.

"The temperature dropping quickly and not being able to get as much off as we need to on the pavement," said Mike Hewitt, Waukegan Public Works Director. "That's kind of a nightmare because it does get cold, and it gets slick, and then people slide and hit things."

"We truly need everyone to adhere to those snow routes. Move those cars, so we can get, we can clean these streets as quickly as possible," said Waukegan Mayor Sam Cunningham.

Our next chance for snow is Saturday, when we could get between 1 to 3 inches of light, powdery snow. A bigger snow event is possible Monday, when Mowry said we could see snow accumulations of 3 to 6 inches.
A Winter Weather Advisory is in effect from 11 a.m. Thursday until noon Friday for Cook, DeKalb, DuPage, Kane, Lake, McHenry, Grundy, Kendall, and LaSalle counties in Illinois and Lake and Porter counties in Indiana.

Some far western counties, including Lee and Ogle, are under a Winter Storm Watch until noon Friday.

Suburban Chicago shoveled and snow-blowed sidewalks and salted roads as the snow and deep freeze moved in.

DuPage County is expected to get a good blast of Thursday's storm. Len's Ace Hardware in Addison is crowded after winter began unusually mildly.

"Right in the beginning of the season, we started out with a little over 700 snow shovels," said manager Rick Remick. "I was a little worried that with the mild weather, I had a plethora of shovels. I ran out, completely ran out."

Officials warned of the possible dangers of misusing space heaters as some struggle to stay warm during this cold snap.

"People have a tendency to pile stuff around it, and those things burn," warned Mike Toika, Addison Fire Marshall. "When you are running those things constantly, they can start things on fire. And we see a lot of that, especially during cold snaps."

The city of Chicago Department of Streets and Sanitation deployed 211 snow vehicles Thursday afternoon to clear the city's streets during the storm and will expand the number to 287 snow vehicles for the evening rush.

Chicago Mayor Lori Lightfoot tweeted a reminder about the city's heat ordinance Wednesday, saying landlords must keep the temperature inside set to at least 68 degrees during the day and 66 degrees at night.

.@NWSChicago is forecasting an arctic blast this weekend with wind chills well below zero.

Remember: If you rent in Chicago, your landlord has to keep the temp set to at least 68° during the day and 66° at night. https://t.co/y1bm8jsvBD pic.twitter.com/wlbAa1eE2G

Cook County Warming Centers will also be open. Visit cookgov.me/warmcenters for more information.
The Chicago Office of Emergency Management and Communications along with the Department of Family and Support Services and other departments urged residents Wednesday to prepare for upcoming arctic weather conditions.

More snow is expected across the Chicago area Thursday. Then bitter cold hits.

Make sure warm air is circulating throughout the home, and keep a trickle of water running in order to prevent frozen pipes. If pipes freeze, do not use candles or any open flame to thaw them. Instead use a hair dryer or heating pad. For more information visit chicago.gov/water.
The Chicago Fire Department does not recommend using space heaters; however, if used, be sure they are UL certified and at least 3 feet from anything that can ignite. The use of a space heater in children's rooms should be monitored closely as children sometimes move them close to or into the bed with tragic results, officials said. If extension cords are used, they should be rated at 15 amps minimum and never put cords under carpet. With the added demand on furnaces and boilers, CFD also reminds residents they are required by ordinance to have working carbon monoxide detectors to protect against carbon monoxide leaks from a heating system that could be fatal over time, and to keep smoke detectors in working order.

Those seeking access to warming centers and/or experiencing insufficient heat are encouraged to contact 311 for immediate assistance.

RELATED: Winter home maintenance: How to prepare your house for snow, cold

OEMC will monitor weather conditions with the National Weather Service and coordinate response efforts with the city's public safety and infrastructure departments and public partners to keep residents safe and informed, officials said.

Residents were reminded to provide any needed assistance to neighbors, family members, the elderly and those most vulnerable during the cold weather. If you need to request a well-being check you can call 311, go to 311.chicago.gov, or use the 311 mobile app.

Lake Michigan was a sight to behold during the snow storm this weekend.