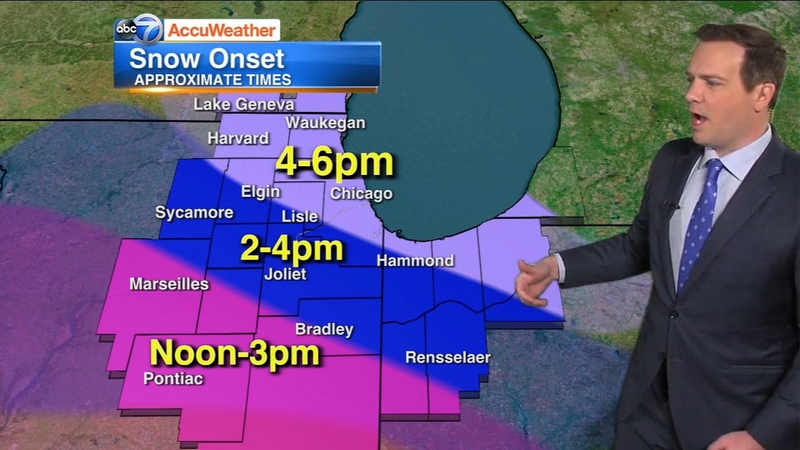 CHICAGO (WLS) -- A Winter Storm Warning has been issued for the Chicago area and much of Northwest Indiana from Saturday afternoon through Sunday evening.

The warning goes into effect at 3 p.m. Saturday and lasts until 6 p.m. Sunday. Heavy, wet snow is likely.

ABC7 Chicago Meteorologist Larry Mowry said the heaviest snow is expected to fall between 6 p.m. Saturday through 2 a.m. Sunday. Snow could fall at a rate of 1 to 1.5 inches per hour during that time with total accumulations between 4 and 7 inches in that window.

Moderate snow is expected to continue through about 8 a.m. Sunday morning, but not as heavy as overnight, Mowry said. Another 1 to 2 inches is possible during this time.
Between 8 a.m. and 6 p.m. Sunday light to moderate snowfall is expected with some lake effect possible. Some light accumulation is possible but the heaviest snow will have passed, Mowry said.

Overall snow totals of 5 to 9 inches are expected in many areas. Higher totals are possible.

From plow to pizza, Chicago prepares

From snowplows to pizza order, the city is getting ready for the weekend winter storm.

"A small snowstorm of 3 to four inches could turn into 7 to 8 inches, just the way the wind is blowing and the temperature around the lakefront," said Rich Giudice, Office of Emergency Management and Communications.

Parking lots have been cleared and piles of snow neatly stacked after Tuesday's storm, and now snow plow operators are gearing up for round two.

"I imagine I probably won't go out 'til 12, 1 a.m. in the morning, because most of the people don't want to have us do it 'til they get up in the morning," said Sean Greaney, who owns a snow blowing business.

He books jobs through an on-demand snow removal app, and after a few dry winters it's welcome work.

"You just look at the dollar signs, that's how I look at it. Gotta make it when you can," he said.

"Pizza's been huge during the pandemic," said Matthew Wilde, owner of Bob's Pizza in Pilsen.