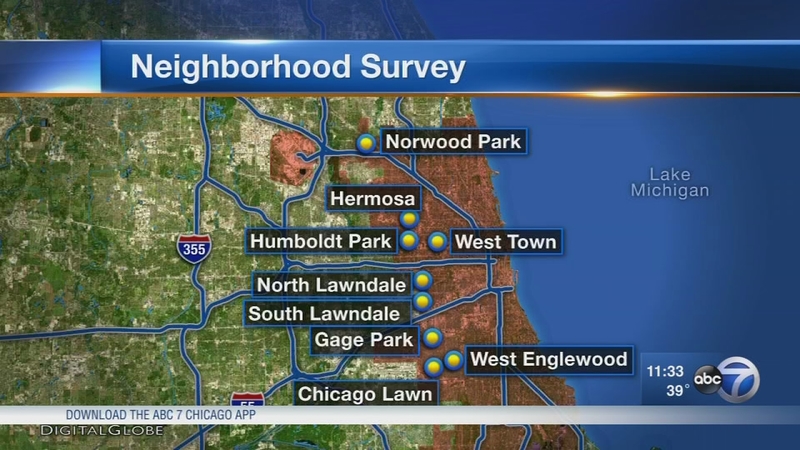 CHICAGO (WLS) -- A new study shows that several Chicago neighborhoods are lagging behind national averages when it comes to physical and mental health.

The largest-ever study of its kind was released Thursday by Sinai Health Systems.

The study cost $1 million and took an in-depth look into Chicago neighborhoods.

About 1,900 people from these nine neighborhoods surveyed through face-to-face interviews. From Norwood Park in the north to Chicago Lawn and West Englewood on the city's South Side.

At Thursday's presentation, there were three major findings.

First, in every single community surveyed, more than 20 percent (one in five) said they feel unhealthy. Many forgo surgeries, medication, even getting eyeglasses, because they cannot afford it. This is a much larger percentage than the national average of 12 percent of people saying they feel unhealthy.

Second, the study also showed more than half of the men in north Lawndale and West Englewood have been arrested. That is correlated with lack of food or hunger in those households.

Third, researchers found crime in the homes as well. One researcher detailed how many people said they've experienced domestic violence.

"We found alarming rates of intimate partner violence. In some of the communities 1 out of three women reported that they had been a victim of this type of violence," Maureen Benjamins, senior research director for Sinai Health Institute, said.

The three neighborhoods where that 30 percent domestic violence statistic is evident is Humboldt Park, North Lawndale and West Englewood.