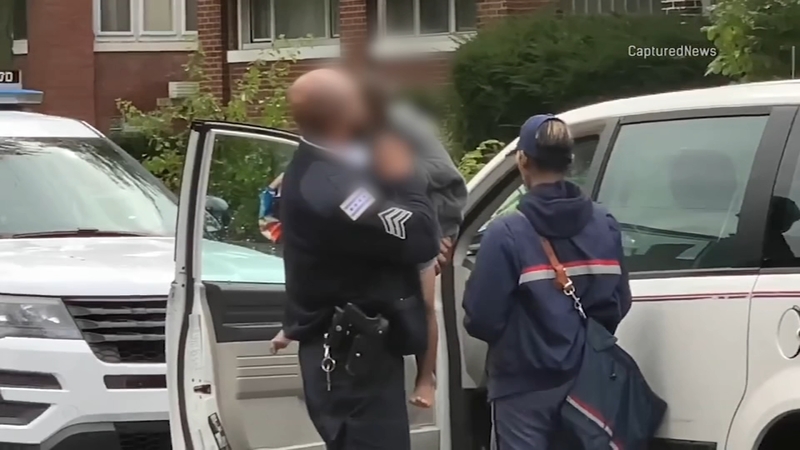 The postal worker said she was approached by a resident in the 7400-block of South Clyde Avenue, who said they saw the child walking down the street without an adult and believed he needed help.

"I was getting ready to start one of my blocks when I was approached by someone who was saying that a young boy needed help," said Shannon Vivinas, mail carrier. "They saw him walking down the street as well. And as you can see it's raining out here."

Vivinas and the neighbor found the toddler walking alone, without any clothes but underwear. She, along with some other residents, wrapped the child in a blanket and called authorities.

"The baby was walking down the street and didn't have anything on but a Pamper," said Karen Ward, witness.

"He looks like he's about three or four years old," Vivinas said. "He had no clothes on, no shoes, anything. Just drawers."

Police said the postal worker called 911 and remained on scene until officers arrived. Police went from house to house hoping to find the little boy's parents.

"I knew that there was no small children on this block," Ward said. "Now, in the next block there's apartment buildings..."

EMTs kept the little boy, who neighbors said looked perfectly happy, safe in the back of an ambulance.

"They had him kind of pacified, had something in his hand. He was a cute little boy," Ward said.

The boy was taken by ambulance to Comer Children's Hospital to be checked out. The Illinois Department of Children and Family Services was notified and has opened their own investigation.

The United States Postal Service said Vivinas has been working for them for about two years.

"Letter carriers are the eyes and ears of the communities they serve. We are thankful the carrier took immediate action and reported the situation," USPS said in a statement.