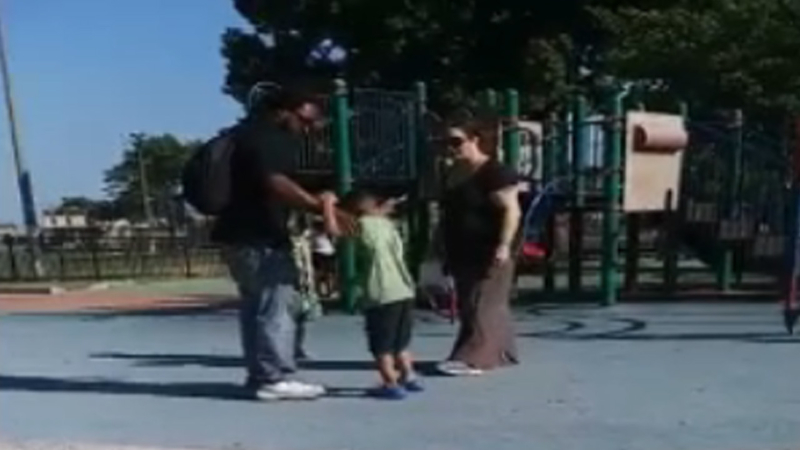 Philadelphia police seek 2 adults over video of child being kicked

PHILADELPHIA -- Philadelphia police are looking for two adults after a video emerged of a child being kicked several times.

Investigators released the video on Friday. They believe the incident happened on July 10 at the Russo Park Playground at Cottman and Torresdale avenues.

In the video, a little boy can be seen kicking a little girl, as an adult man separates them saying 'No kicking!'

An adult woman then kicks the little boy twice, saying 'No kicking! You want to kick? How do you feel?'

A few moments later, the group walks out of view of the camera as the video ends.

Right now investigators say they don't know much of what happened beforehand, but Kelly Jax says she does. She took the video and says what happened was disturbing.

Jax claims that the woman seen in the video was actually encouraging the two children to fight.

"As they were fighting the little boy was distressed. He did not want to fight," Jax said. "She was standing there laughing."

Jax says plenty of people were watching as the little girl took him to the ground.

"The little girl got him in a headlock on the ground and he wanted her off, he couldn't breathe," Jax said.

Finally, she says, it was when the little boy kicked his way free that the woman kicked him.

"The man said no hitting, no kicking, and that's when she came around and kicked that boy so hard."

Since Jax has posted the video it's gained a lot of traction on social media, being shared thousands of times. Jax says people have questioned why she didn't rush in and stop it.

She said she desperately wanted to but couldn't because she was watching her grandchildren at the time.

"I didn't go after her and grab her, I should have. I kept reading the comments but I had the girls with me and I couldn't do it because I didn't have anyone there to keep my kids and keep them safe," said Jax.

At a news conference on Friday, Captain Sekou Kinnebrew said he was grateful the video was taken. Now they need to find these two adults.

He says there's a lot of unanswered questions about this video.