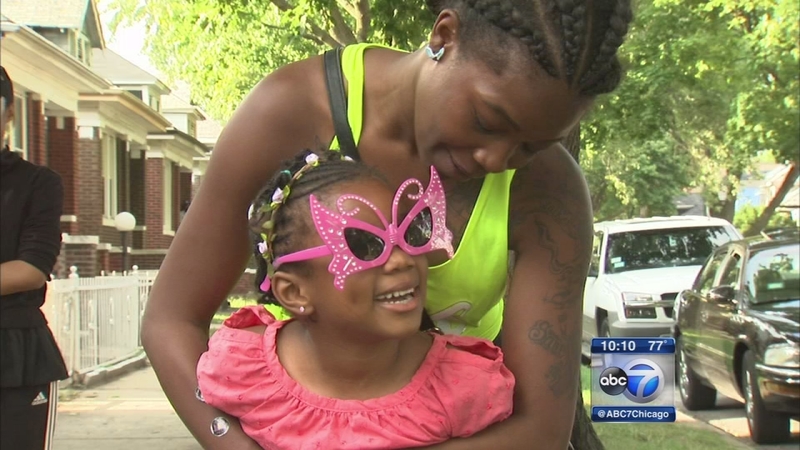 CHICAGO (WLS) -- Sunday was a happy homecoming for 6-year-old girl Zariah Muhammad, who returned home days after she was shot while playing outside her home.

Zariah - the 25th child under age 13 to be shot in Chicago in 2016 -- was bubbly, energetic and happy on Sunday, despite the bandage on her head where a bullet fractured her skull on Thursday.

She said she felt great and didn't feel pain.

Zariah was, according to family and friends, one of several children who were playing with water balloons In the street Thursday when someone walked up to her uncle, 22-year-old David Mcray and shot him once in the chest.

The second bullet struck her.

But on Sunday, she showed off a cartful of loot collected during her hospital stay. She also showed off a poster tribute to her dead uncle -- a somber reminder, that while she survived and her family celebrates that survival, they family is also in mourning.

"Her joy and her spirit is keeping me balanced," said her mother Gloria Strong. "The hard part is not over yet. The hard part is going to this funeral and her seeing her uncle actually laying there."

An arrest has not yet been made in connection with the shooting, though police do believe Mcray was the intended target.

As for Zariah, she's getting ready to start the first grade at Woodlawn Elementary.

But, before that, she has just one request -- Chuck E Cheese's.