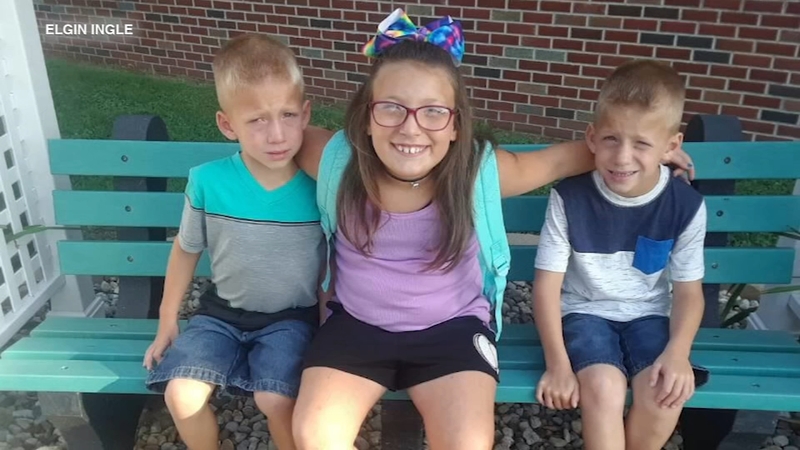 ROCHESTER, Ind. (WLS) -- A church service is underway to remember three siblings who were struck and killed Tuesday morning as they crossed the street to their school bus in Rochester, Indiana.

The community is struggling to heal in the wake of the tragedy, and some residents said as they entered the church that their city is "broken."

Few people have seen or spoken to the children's parents, but inside the church the mayor of Rochester recounted his conversation with their mother, who said she held her daughter in the street as she took her last breaths.

Indiana State Police said twins 6-year-old Xzavier and Mason Ingle and their older sister 9-year-old Alivia Stahl were crossing the street to board their school bus, which had its lights on and caution arm extended, at about 7:15 a.m. near 4600 N State Road 25 when they were struck and killed.

Alivia tried to shield Xzavier and Mason from the Toyota Tacoma speeding toward them, investigators said. Her mother said Alivia was like another mom to her little brothers.

"We love the children that were killed, the family that was shattered," said Michele Howard, Rochester resident.

So far Low has undergone five successful surgeries, is talking and can move all his limbs.

Alyssa Shepherd, 24, is charged with three felony counts of reckless homicide and one misdemeanor count of passing a school bus while its arm is extended, causing injury. She told police she saw the bus's lights but did not realize it was a school bus until the children were right in front of her.

Shepherd also told police she had three children in her backseat when the crash happened. She is the children's director at Faith Outreach - A Foursquare Gospel Church nearby in Rochester.

"It goes for both sides because that poor driver... I'm sure she didn't plan on doing that. Only God knows what happened," said Hector Fernandez, Rochester resident.

"Obviously there's going to be some folks who will hold ill will on this. It's just a very tragic situation and for everyone to heal we have to move forward," said Fulton County Sheriff Chris Sailors.

Thursday night they prayed. It's all they can do right now.