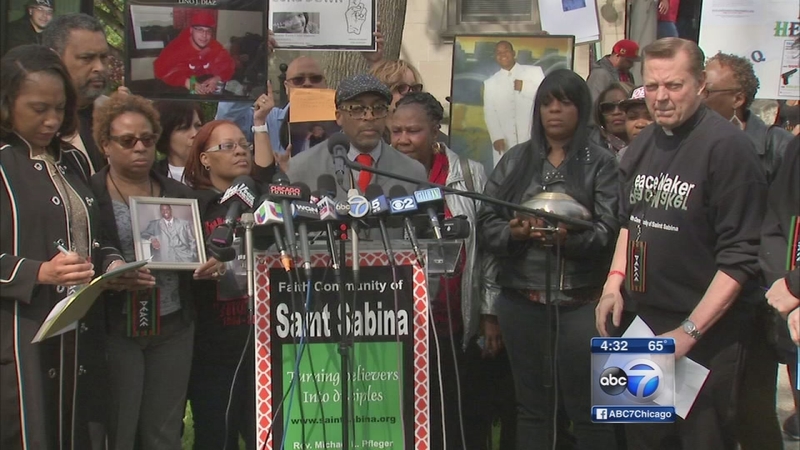 CHICAGO (WLS) -- Followed by mothers who have lost children to gun violence, director Spike Lee came to the city's South Side to defend his upcoming film, "Chiraq."

Mayor Rahm Emanuel and some alderman have called the title offensive, but Lee says to just give it a chance. Concern about the film's title prompted some to propose an effort to deny Lee a $3 million tax credit.

Evanston native John Cusack will star in the movie. He says there is no controversy surrounding the film except manufactured political controversy.

"I'm 100 percent sure that the great city of Chicago can survive a film of conscience, just like it did 'Transformers,'" Cusack said.

Cusack nor Lee would not talk about the plot of the movie or whether it will be serious or a comedy, but given Thursday's tone, it is likely to take a realistic look at gun violence in Chicago. Those affected by the violence hope putting the issue on the big screen will bring awareness to something that affects so many Chicago families.

"When you shoot someone you not only shoot that person, you shoot everyone that cares about them," said Eric Wilkins, a gunshot victim.

Wilkins is a living face of violence. Sixteen years ago he was shot in the back, leaving him paralyzed. A few years later, his own son was shot and is a quadriplegic. Others here can only hold pictures of their kids.

It's been almost two years since Sarah Turner's son was shot to death.

"Hopefully the movie will bring awareness and realism to what is going on here, I don't care about tourism or anything else, we need help here," Turner said.

Lee is hoping his movie will help.

"This is not a joke, not a game, this is real life and death - that is the way I'm going to approach this," he said.

The movie will begin filming in the city's South Side in June.

Over the weekend, several hundred people lined up in Chicago's Auburn Gresham neighborhood for a chance to be cast as extras in the film. Hopefuls began lining up for the casting call as early as 4 a.m. Saturday, which began six hours later.

"Chiraq" will be shot in the city's Englewood neighborhood this summer. Between 400 and 500 people will work on the film. Many of those workers are expected to be local hires.

Production should take about six weeks with a budget of about $15 million. It's expected to generate $40 million in direct and indirect local economic activity.