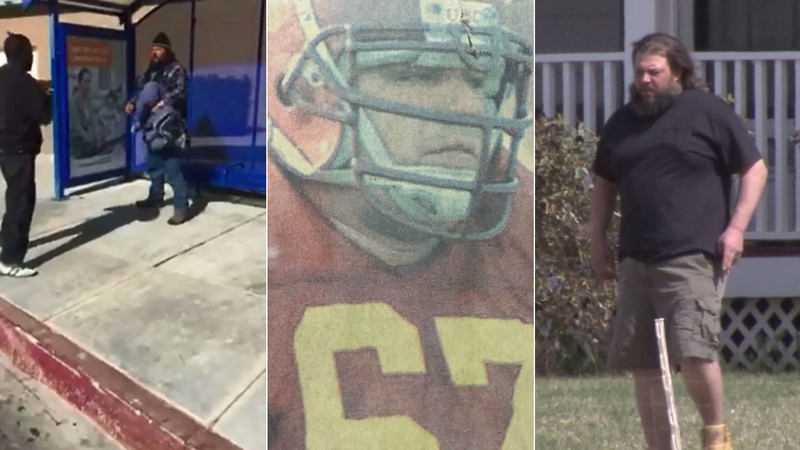 APPLE VALLEY, Calif. -- How did Chris Brymer go from being a star athlete at USC to homeless on the streets? His ex-wife is questioning whether brain damage from football is to blame.

Video of a violent confrontation that took place recently in a Costco parking lot in Victorville quickly went viral. The footage shows a homeless man fending off an attacker. He is seen throwing punch after punch, until the attacker falls to the ground and backs off.

That homeless man is Brymer.

In Apple Valley, Brymer is a local legend. His football career brought him fame and fortune. But it also destroyed a family, leaving the former star homeless.

Matt Rohrbaugh, Brymer's former teammate at Apple Valley High School in the early 90s, saw the video of the fight.

"I was mad and I wish I was there," Rohrbaugh said.

Rohrbaugh is now the head football coach at Apple Valley High. Brymer went on to play for coach John Robinson at USC.

"I think God just blessed him with just that attitude, the size, the strength, the speed," Rohrbaugh said.

These skills landed Brymer with the Dallas Cowboys, NFL Europe and even the XFL in Los Angeles in 2001.

"The funny thing is that our business was much more lucrative than football," said Brymer's ex-wife, Melissa.

After his playing career, Brymer and Melissa had multiple homes in Orange County with a successful real estate business. But they lost it all as Brymer started exhibiting destructive behavior.

"I was just having to process that it was over," Melissa said.

The two divorced when their son was just 2 years old. The boy is now a 6-foot-1 12-year-old who will never be allowed to play football.

"After knowing what I know, that would be reckless and absolutely negligent on my part," Melissa said.

She believes Brymer's behavior is the result of chronic traumatic encephalopathy (CTE), a brain disease that results from too many concussions.

"It is, in my opinion, true CTE. I remember the first time I saw the definition. I couldn't believe it. It was like they wrote every single line item about him," she said.

Brymer's mental instability cost him everything. He's been homeless for six years.

Surrounding residents say he was living in a tent last year across the street from his parents' house. He would hunt for food in a dumpster outside a tattoo parlor in Hesperia.

"Chris is a breed where I've noticed that he doesn't want anything. He doesn't even want to talk about his situation. We tried buying him even Gatorade and stuff like that," said Chris Burnett with Dinamik Tattoo.

Over the past month, Eyewitness News has visited Apple Valley trying to find Brymer. Sheriff's deputies, friends and the homeless have reported seeing him around. We finally found him about a mile and a half from where he used to play high school football. He was on the front lawn of his parents' house.

Brymer was very friendly. He was happy to take the food and water I offered. But he denied ever knowing coach Robinson, playing at USC or even playing football.

When I told him that his 12-year-old son would like a relationship with him, he said, "That's above me."

He also said if I really wanted to help, I could turn around and find the road.

"I've been teaching for 16 years, and I have no idea how to help this guy. None, none," Rohrbaugh said. "How do you take a homeless man who you know needs some mental help, and how do you help somebody who doesn't want help?"

We were surprised to find Brymer, but not nearly as surprised as Melissa, who saw how homelessness destroyed the man she once loved.

"I've never seen him look anything like that," she said through tears. "He looks like a mountain man. He looks so old and so out of shape."

Melissa pointed to the screen and said that's the reason why her son will never play football.