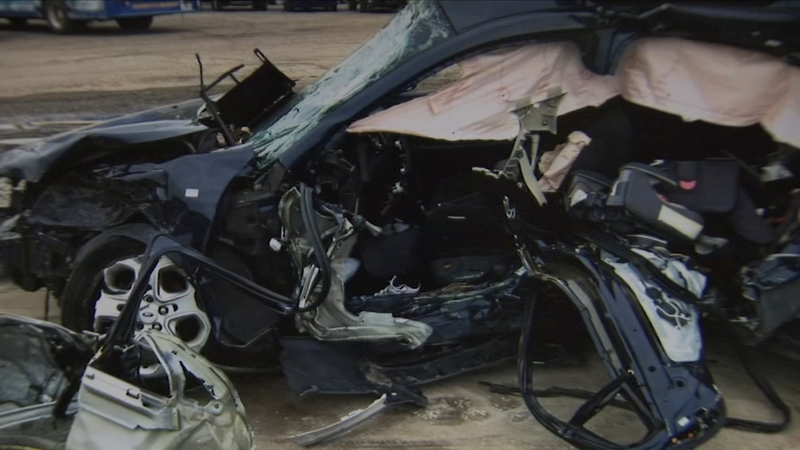 CHICAGO (WLS) -- The family of a man and a toddler killed in a car crash earlier this month on the city's South Side are now suing Chicago police. A third person was also killed.

The family claims that the car that caused that deadly collision was being chased by police. They want COPA, the Civilian Office of Police Accountability, to get involved.

Awaiting NC as mothers of victims of this fatal crash sue Chicago police for not stopping a high speed chase of the car that hit this one. 3 dead. These are the father and son, Chrishawn and Cabari Turner. Lead story @ABC7Chicago 5pm news w @KrasheskyABC7 @BurtonABC7 pic.twitter.com/7dXFnReNkY

In a downtown law office, 3-year-old Shamari Turner fidgets in her mother's arms, oblivious it seems now to the loss of her father and brother on October 1. She escaped virtually unharmed from the horrific wreck of the family car, T-boned at 69th and Loomis by an eastbound car fleeing Chicago police.

Now, the mothers of Chrishawn and Cabari Turner want answers.

"I hold his hair to comfort me at night," said Chrishawn Turner's mother, Cynthia Turner. "I have pictures that I look at, that's kind of reality, then it is not reality."

She is joined by her son's fiance, Sharnice McGee. Holding Shamari, she says of her lost son, "He was like a good child, overall, so sweet, so handsome, so loving."

"Him and his dad had a good relationship and he was an awesome dad, he treated us so good," she continued.

Chicago police say they chased a suspected speeder around 7:40 p.m. October 1, but shut off their lights and disengaged before the crash. They say the suspect kept going, blew a red light and caused the accident that killed the Turners, as well as friend Antonio Cowan. Shamari was sitting behind him.
Attorney James Montgomery is representing the two women.

"We had a police officer who knew of a traffic violation -- speeding -- and he engaged in a chase on a busy street at a busy time," Montgomery charged. "In our view, the engagement of the chase at all was completely inappropriate."

Chicago police say the fleeing driver is Christopher Carter, who was spotted on security camera video running away from the accident. He was charged last week with multiple counts of murder and reckless homicide.

Sharnice McGee has moved back into the city from Gary with her daughter to live with her mother-in-law. The three now only have each other.

"The only thing I have is the hair in my hand, in the palm of my hand, so this is hard for me. I'm just trying to get through this and I just want to see justice done because that accident could have been avoidable," said Cynthia Turner.

The litigants want COPA involved to ensure police reports are handled transparently, and as a check on whether police guidelines for handling chases were followed.