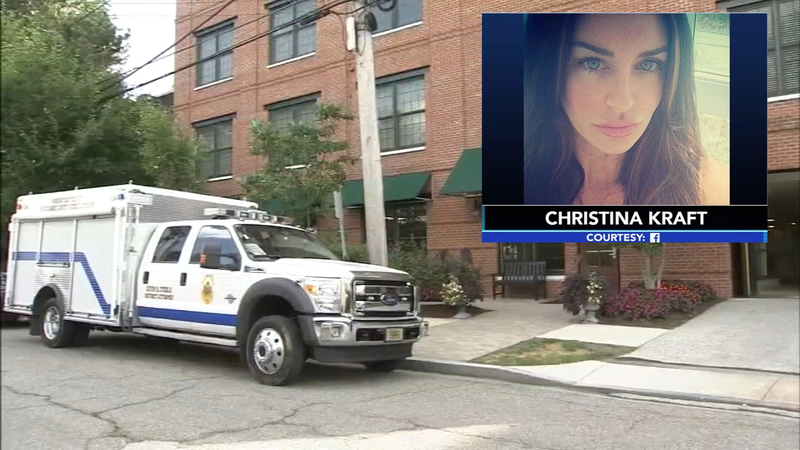 ARDMORE, Pa. -- The Montgomery County District Attorney's Office is investigating the homicide of a 36-year-old woman who authorities say was strangled in her Lower Merion apartment.

Police and detectives with the DA's office were at a condominium complex in the 100 block of Sibley Avenue Thursday afternoon as an officer guarded the entrance to the building.

Investigators said they were called to the home around 9:15 p.m. Wednesday for a welfare check and found Christina Carlin-Kraft dead in the bedroom inside her first-floor unit at the Cambridge Square apartments.

Sources say surveillance video shows a man following Kraft into the building the night before her body was discovered. Police believe he left by jumping off the balcony.

Kraft was a model who according to a booking page credits herself with a "tasteful photo shoot for Playboy that was beyond hollywood glamour."

An autopsy performed by the Montgomery County Coroner's Office, determined her cause of death was strangulation and the manner of death was homicide.

A source said Kraft reported having items stolen from her home a few days ago. Police executed a search warrant in Southwest Philadelphia on the 6500 block of Theodore Street early Wednesday and said they recovered some of her belongings including jewelry and designer bags. It's not clear at this time if the theft is connected to her homicide.

Police have not announced any arrests, but officials said people who live in the area should not be concerned.

Anyone with information is asked to call the Lower Merion Police Department or the Montgomery County Detective Bureau.