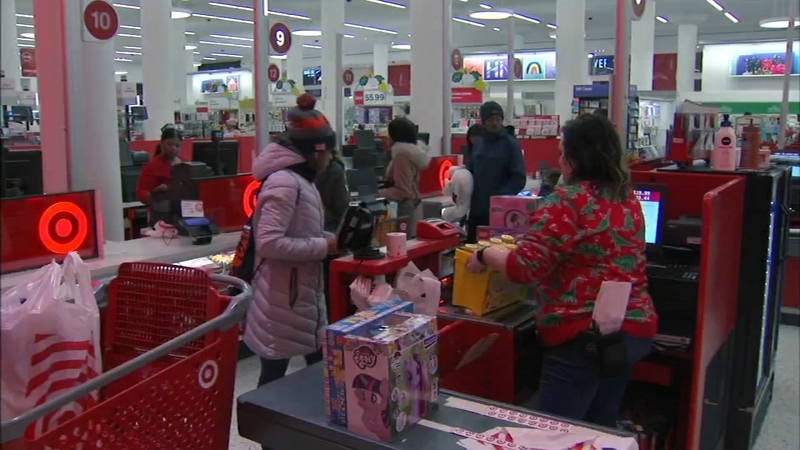 The Magnificent Mile was a sea of bundled-up people with shopping bags in tow.

"No, I wait 'til the last minute like a true American," said Rhett Loubeck, shopper.

While some shoppers are rushing to get every name covered on their holiday lists, the Loubeck family said this is a tradition they can all enjoy together.

"We're going to procrastinate together. That's what we do," Bryan Loubeck said.

According to the National Retail Federation 7 percent of shoppers surveyed plan to finish their holiday shopping on Christmas Eve. Another 4 percent said they will still be buying gifts after Christmas Day.

Stores may be packed with shoppers, but families said it's all about being together.

"I think it's, like, a great experience. I feel like it's one of those family traditions that we do," said Bryan Loubeck.

"We decided to come when everybody else left," Donna Loubeck said.

Most stores closed up shop by dinner time but Target on State Street was one of few open late for last minute shoppers.

In the midday sun at Skokie's Old Orchard Mall there was relative calm as people picked up presents.

In the midday sun at Skokie's Old Orchard Mall there was relative calm as people picked up presents.

"Some of the stores have run out of things, but everybody is in a good mood, everybody is very nice," said shopper Tamara Dittmeier.

"We should have been out but we are procrastinators today," said shopper Albert Pickens.

"When you work a lot and you don't have a lot of free time you've just got to get it in when you can," added Kimberly Pickens.

The outdoor mall has benefitted from a strong economy and mild weather.

"We've got suggested gift guides online to look for the perfect gift, we've got every person on your list and we've got a great mix of retailers who have a great selection of products and gifts," said Gayle Gleespen, marketing director of Westfield Old Orchard Mall.

If you forgot someone on your nice list, fear not because some major retailers are still welcoming your business on Christmas Eve.

At Rosemont's factory outlets, procrastinators came from all over to scoop up deals. That was also true for smaller stores in neighboring Evanston.

At the mall, Apple watches and giftcards flew out of the Apple store and wireless AirPods sold out across the Chicago region.

Shoppers ABC7 talked to say they either forgot to buy their gifts while others procrastinate for a purpose.

"I think it is going to be crazy," said shopper Laura Smith. "That is why I'm here now. I want to get out of here as fast as possible."

Smith shops on Christmas Eve every year. She said she doesn't have to wait in line and finds better deals.

"I'm a hardcore procrastinator," she said. "I wish I was a better person and better at that, but I'm not."

The Fashion Outlets of Chicago is happy to see the rush.

"We do expect a great turnout today," said Katie Walsh, marketing manager for Fashion Outlets of Chicago. "It is the day before Christmas and people need last-minute gifts. They are going to show up and shop."

Many stores stayed open around the clock. The Kohl's in the Bucktown neighborhood was open 24 hours and busy all night.

"It was very convenient," said shopper Javier Rodriguez, Jr. "I like the hours. So even though it is last-minute, it is still flexible."

The flexible hours are great for parents like Christian Martinez.

"I got away from my kids," Martiniez. "I kept buying stuff for them and they kept catching me, so now these they haven't caught me, so I am going to have to wrap these."