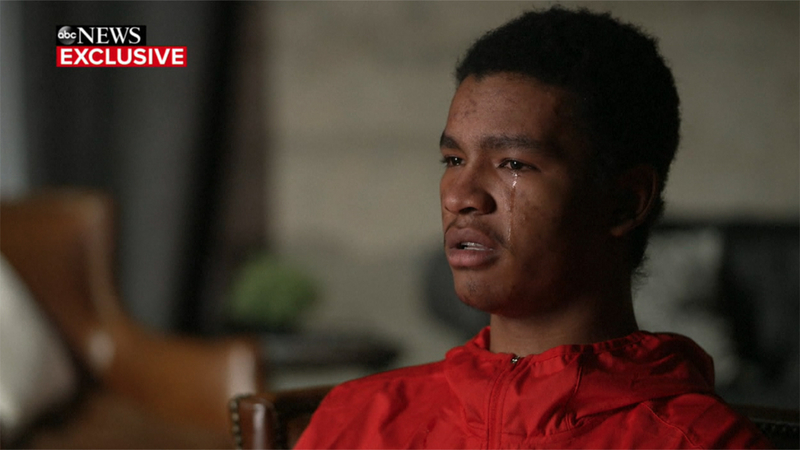 MINNEAPOLIS -- The first witness to speak in the criminal trial of Derek Chauvin, the former Minneapolis police officer charged in the death of George Floyd, expressed guilt on the stand for telling his manager that he believed Floyd had used a counterfeit $20 bill, leading to Floyd's arrest.

That witness, 19-year-old Christopher Martin, spoke exclusively to ABC News after the trial, sharing his regrets, hopes for Floyd's family and a message for Chauvin.

"There is so much pain and hurt that followed that was unneeded ... After this whole trial -- whether or not [Chauvin's] locked up -- George Floyd is no longer here," Martin said.

Martin testified Wednesday that he watched Floyd's arrest outside his former employer Cup Foods with "disbelief - and guilt."

"If I would've just not tooken the bill, this could've been avoided," Martin lamented, joining the burgeoning list of witnesses who expressed a sense of helplessness and lingering guilt over Floyd's death.

Christopher Martin, the convenience store cashier who sold cigarettes to George Floyd and was handed a counterfeit $20 bill in return, took the stand on day three of former officer Derek Chauvin's murder trial as prosecutors laid out the sequence of events that led to Floyd's ill-fated arrest outside.

Martin said that when Floyd was inside the store buying cigarettes, he spoke so slowly "it would appear that he was high." But he described Floyd as friendly and talkative.

He told ABC News he doesn't blame himself for Floyd's death but can't shake his sense of guilt.

"Not only am I the contributing factor, I'm kind of like the big domino that fell, and then now all the small dominos are just scattered," he said.

George Floyd's girlfriend testified about how they met and how they both struggled with opioid use.

As the world reacted to and demanded justice for Floyd's death, Martin said he thought about Floyd's children.

"I know what it's like to grow up in an African-American household without a father ... I just hope and pray that George's daughters know that they can do it and it's possible. To do it, to make it, and be successful, even if your father is no longer with you," he said.

He also shared a message for Chauvin.

"The one thing I would say to Derek Chauvin is: Justice will be served," Martin said.

Martin no longer works at Cup Food and said he's received encouragement and support as he tries to move forward.