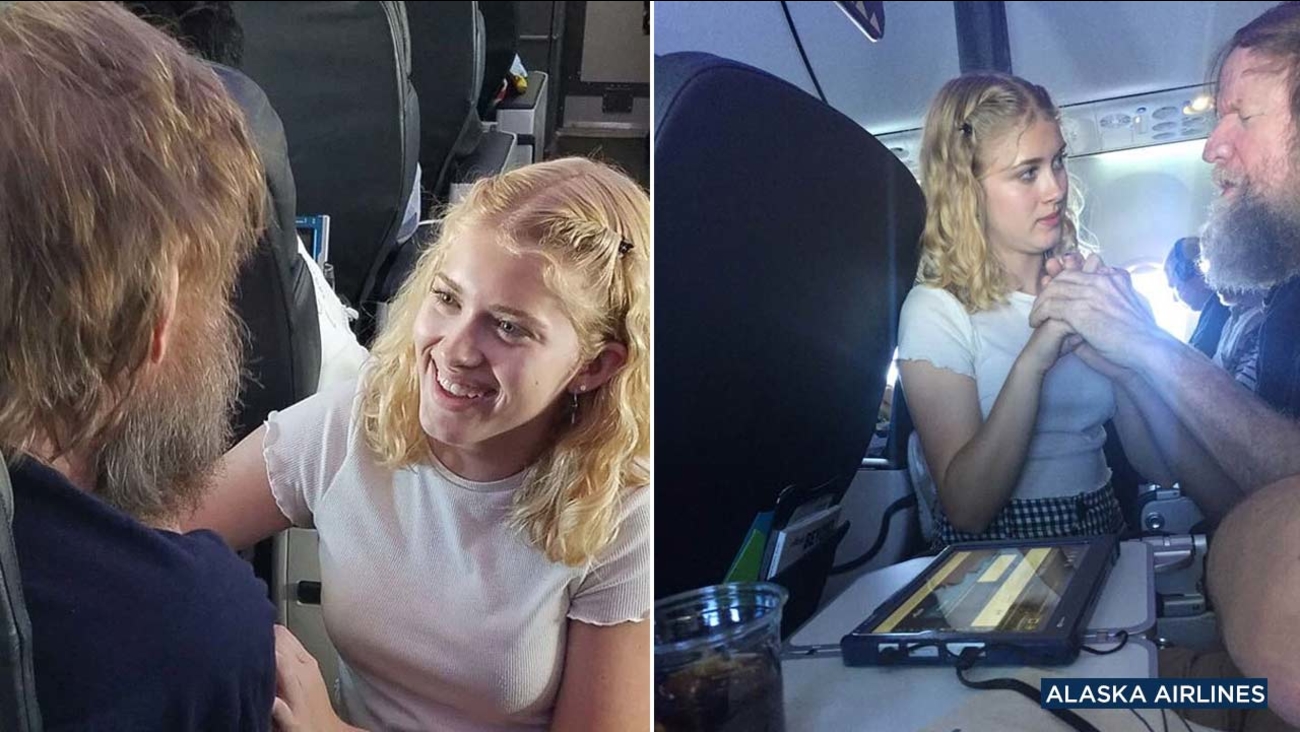 A viral image that appeared earlier in June showed a humane moment: a teenager using American Sign Language to communicate with a DeafBlind man on a flight.

Californian Clara Daly, 15, assisted Tim Cook, 64, who was struggling to communicate with the crew on a flight from Boston to Portland, Oregon. A fellow passenger took a photo of the interaction, which had been liked on Facebook over a million times as of Sunday, according to the Associated Press.

AP reports that Cook told KGW-TV that he was "very moved" by Daly's assistance. But what should bystanders do if they find themselves in a similar situation?

ABC7Chicago.com reached out to members of Chicago's DeafBlind community to find out.

Some of those we interviewed emphasized that people should not assume that a DeafBlind person travelling alone is in need of assistance. Sara Chung said that those who cannot travel independently would likely be accompanied by a Support Service Provider, who might provide interpretation, visual information, or guiding.

"I, myself, am DeafBlind and can fly alone," Chung said. "I've flown alone several times in the past and haven't had any problems...DeafBlind people fly independently all the time and have various ways to manage themselves."

If a person with visual or hearing impairment needs assistance, they will likely have means of asking for it, such as writing a note or using an iPhone with Braille functions, said Kelly Monahan. Jeffrey Bohrman added that some DeafBlind people carry communication cards that explain their disability and communication needs.

If assistance is requested, it should be given in a way that is not forceful, said Mindy Jo Mayer.

"Allow them to decide and be able to communicate for themselves, with an honest interpreting...DeafBlind people are human beings and we have the same what normal people have," Mayer said.

Although a situation like the one in Daly and Cook's viral photo might be heartwarming to other bystanders, members of the DeafBlind community said photos and videos shouldn't be posted without permission.

"I would be upset if someone took pictures or video of me to post in public without my permission," Monahan said.

Mayer said that bystanders should let people who find themselves in these situations know if they are being photographed.

"It is important that the disabled people are aware of the environment and be able to have some communication access," Mayer said.

Some voiced concerns that the photo of Daly and Cook might spread misinformation about the DeafBlind community, but felt that the post could have positive effects as well.

"I personally felt that the viral video gave the wrong impression of what DeafBlind people can do," Chung said. "This person who posted the video has no clue about the DeafBlind capabilities and abilities...Obviously the public simply does not understand us DeafBlind people or even have a clue."

Chung added that the video might offer encouragement to some DeafBlind people who need to be reminded that there are good people in the world.

Mayer said she thought the video showed that DeafBlind people are able to communicate, but that those who make posts about people with disabilities should be careful not to confuse sympathy with assistance.

"Sympathizing with the disability is not helping," Mayer said.

"I would encourage people to educate themselves about the DeafBlind community and culture," Monahan said.