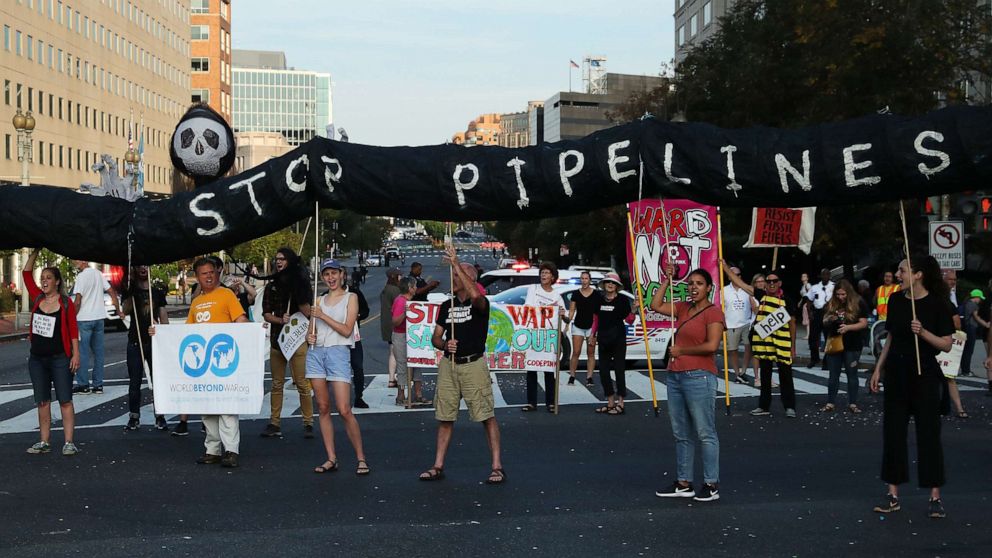 Morning commutes around Washington, D.C., were disrupted Monday by activists calling for action on climate change.

The protest came after activists gathered at the Capitol on Friday for the Global Climate Strike and coincided with the United Nations Climate Action Summit in New York, where world leaders were meeting to "discuss a leap in collective national ambition" for climate change.

The protesters in the nation's capital, calling themselves Shut Down D.C., blocked major intersections around the city, including K and 16th Streets NW not far from the White House and near where many lobbying and law firms are located, and New York Avenue at Florida Ave NE, saying that "shutting down the nation's capital could be our best shot at starting this justice-based transition" for climate change.

The demonstrators tweeted as they blocked streets, some of them getting arrested.

"We know that this shutdown will cause massive disruption to people who bear little responsibility for the climate catastrophe we are facing," the group said on its website. "But we will also cause massive disruption for politicians, huge corporations and the lobbyists who control our government. We need to fundamentally change the power structure of the United States if we want to stop the climate crisis, and shutting down DC is a big step in the right direction."

Police could be seen at K and 16th Streets NW where a few dozen protesters had placed a pink sailboat in the middle of the intersection, christening it the "Extinction Rebellion."

The group is demanding immediate action on climate change including transitioning to 100% renewable energy production by 2030, protecting and restoring of 50% of the world's land and oceans and honoring the rights of indigenous people's lands.

It was unclear how much disruption the protests are causing. Public transit agencies advised riders to be aware for their morning commutes.

The Maryland Department of Transportation also warned of "possible delays" due to the protests.

The Metropolitan Police Department confirmed to ABC News that there were 26 arrests made from the protest due to demonstrators blocking traffic.

The protest finished in Farragut Square at approximately 12:30 p.m. While some climate change activists left the park, others gathered around more than a dozen pizza boxes.

Some of the empty boxes were thrown away in trash cans within the park. ABC News contacted the District of Columbia's Department of Public Works, which confirmed that those boxes will not be recycled since they were put into a regular trash can.

ABC News reached out to the group for comment.

"Today's action was about changing the course of our society to a just and sustainable future powered by 100% clean, renewable energy," said Denise Robbins, communications director at CCAN Action Fund. "Such a future will ideally include pizza boxes that are compostable or easily recyclable (in DC, they are not recyclable when soiled with grease)."
Report a correction or typo
Related topics:
abc newsnational
Copyright © 2020 ABC News Internet Ventures.
More Videos
From CNN Newsource affiliates
TOP STORIES