Cold blast all the way to the Gulf Coast, snow continues for Eastern Lakes 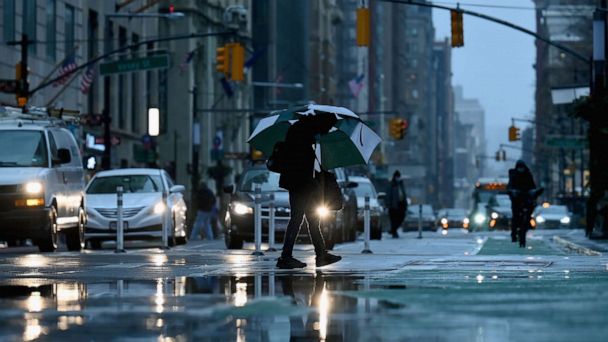 A major storm system moving through the Eastern U.S. is bringing damaging and dangerous weather from Ohio to Maine and down to Florida.

There were four reported tornadoes in Florida and 19 severe damaging storm reports from Maryland to New Jersey.


Winds gusted to 105 mph as an EF-1 tornado moved through Florida's panhandle north of Tallahassee and produced damage.

A tornado was also reported north of Tampa Bay area with some damage reported there as well.

In the Northeast, winds gusted 60 to 89 mph from Maryland to Maine with damage reported and power outages to hundreds of thousands of residents.

Flooding was also reported in the Northeast with some areas getting more than 4 inches of rain.

Behind this storm system, snow and cold is now moving in and already up to a half a foot of snow fell in parts of Ohio where there is Winter Storm Warning.

Snow has been flying as far south as Atlanta and western North Carolina.

On Tuesday, this storm system is now in the Northeast and bringing heavy snow from western New York and Pennsylvania into Ohio and down to western North Carolina and eastern Tennessee.


Additionally, 6 to 12 inches of snow is expected today in western New York, Pennsylvania and northeast Ohio.

Up to half a foot of snow is also possible down the Appalachian mountains in West Virginia and North Carolina.

Behind the storm, its cold this morning all the way to the Gulf Coast where wind chills are in the 20s even in Panama City, Florida, and in the 30s in New Orleans.

A freeze warning has been issued from Texas all the way to northern Florida.

The cold blast moves into the Northeast and the East Coast tomorrow morning with wind chills in the 20s from New York City to Raleigh.