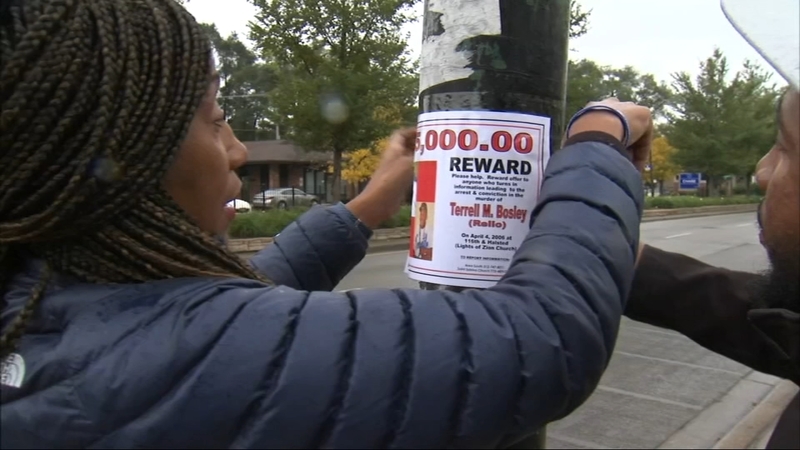 CHICAGO (WLS) -- Mothers who lost children to gun violence take to the streets, along with members of the Police Department, in an effort to bring justice to some cold case murders.

Pam Bosley has posted hundreds of reward fliers and will keep doing it until her son's murder is solved. Terrell Bosley was shot to death 12 years ago in a church parking lot. Since then Bosley has become the face for so many Chicago mothers dealing with unsolved homicides.

"So, I have to believe in my heart justice is going to come soon for Terrell, " she said.

Lasonia Davis hopes to get justice for her son Tyrone White, who was killed two years ago.

"I can't give up on my son if I give up who gonna fight for him, " said Davis.

Davis is a member of Purpose Over Pain, a nonprofit advocacy group of parents who have lost their children to gun violence, which Bosley founded. It is also a support group.

Bosley and other parents of victims with unsolved cases have spent years doing their own detective work by passing out fliers and gathering information from the community.

Friday they partnered with the Chicago Police Department by having detectives pass out fliers with them.

"Just in case somebody gives us information we want to have the detectives to give the info to them," said Bosley.

"By them (the police) working with us and out here with us, they can see they care, trying to help , but community you have to help too," said Davis.

The mothers hope they can help break a code of silence in the community.

Johncee Cobb plans to pound pavement until her nephew's murder is solved. Edwin Cook would have been 23 years old today.

"He was full of life, suddenly he is not here anymore, no answers, no peace, it makes it doubly hard," said Cobb.