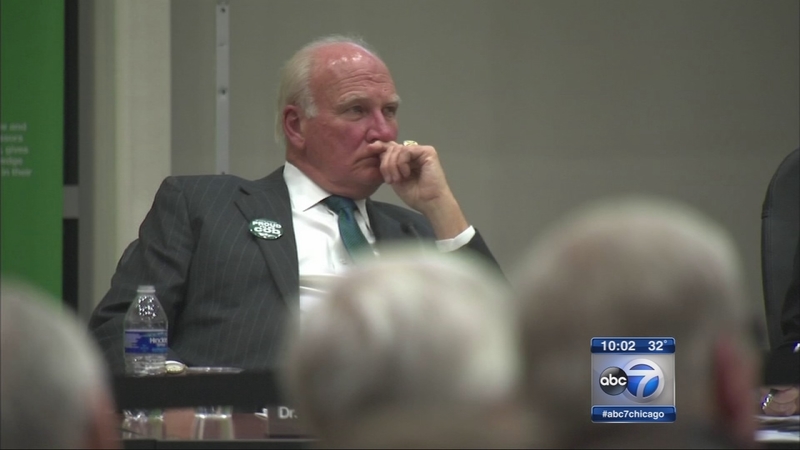 GLEN ELLYN, Ill. (WLS) -- The College of DuPage board of trustees met Wednesday to discuss a controversial severance package it approved last week to give retiring president Dr. Robert Breuder a $750,000 buyout.

An overflow crowd packed the meeting Wednesday night, where many furious taxpayers addressed the College of DuPage board of trustees. The board voted a second time, 6 to 1, to approve the payout to the college president despite the fact that the overwhelming majority of those in the crowd were against it.

Breuder sat front and center at the head table with board members as speaker after speaker asked the board to reconsider giving him a retirement payout of more than $750,000.

"We should fire Dr. Breuder, and not reward him," said Kathy Hamilton, a College of DuPage board member.

Breuder has been president of the community college for six years and plans to retire in the middle of his contract next March.

At the meeting Wednesday night, there were seats for 300 people in the room, but they could have used at least another hundred to accommodate all those standing and waiting to voice their opinions. A judge's decision forced them to move the meeting to this larger room rather than the small room where it was originally scheduled.

"This is a junior college, your students are strivers - working and middle class people - and this is wrong," said Adam Andrejewski, founder, Openthebooks.com.

Board member Kathy Hamilton sides with much of the audience, and spoke from the podium. The president looked on, but said nothing.

"Look at the circus he has made of the majority payoff. Look around, please. The community is not with you," Hamilton said.

A state lawmaker is one of those who spoke to the board tonight. She threatened to ask the legislature in Springfield to withhold $763,000 in state funding to the school next year.