Aurora Pride parade and festival back on for 2019 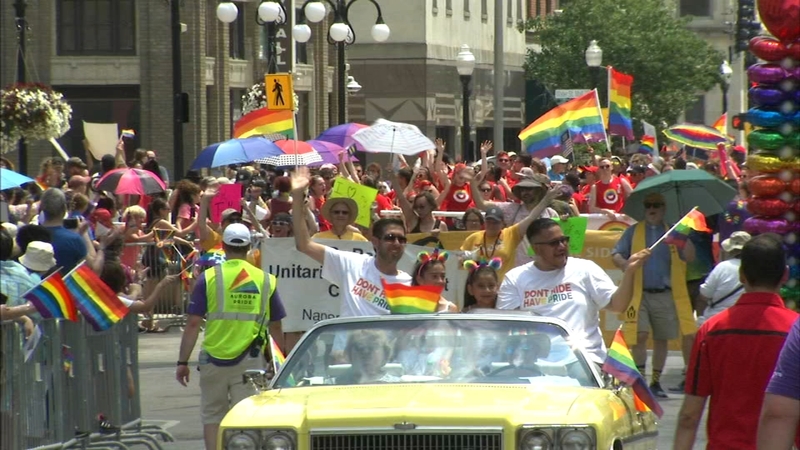 Aurora Pride parade and festival back on for 2019

AURORA, Ill. (WLS) -- One week after announcing its cancellation, organizers said the Aurora Pride Parade and Festival are back on for 2019.

Aurora Mayor Richard Irvin said the second annual parade and festival will take place as planned on their original dates of June 8 and 9.

Indivisible Aurora initially said they could not afford to produce the event due to a new city ordinance that would make this year's event four times as expensive to run. The estimated cost was $37,000. The group couldn't afford that, so they had to cancel the event.

Organizers said the announcement caused a fierce backlash and an outpouring of support not only from the LGBT community and community at large, but also from the religious community. The overwhelming message was that last year's parade was a resounding success and people wanted it to come back.

Organizers worked with city officials to find a way to make it work and now the parade and festival are back on.

The increase in costs was largely for security and barricades; security costs totaled nearly $19,000 for 2019. A campaign will be open until April 30 for donations from local businesses and the community to help cover those costs. Additionally, the city pledged grant money and a downtown business organization provided a $4,500 donation. An additional $12,000 must be raised to cover those security costs, officials said.

Click here to visit the GoFundMe page for the 2019 Aurora Pride Parade and Festival, and to make a donation.

One week after announcing its cancelation, organizers said the Aurora Pride Parade and Festival are back on for 2019.