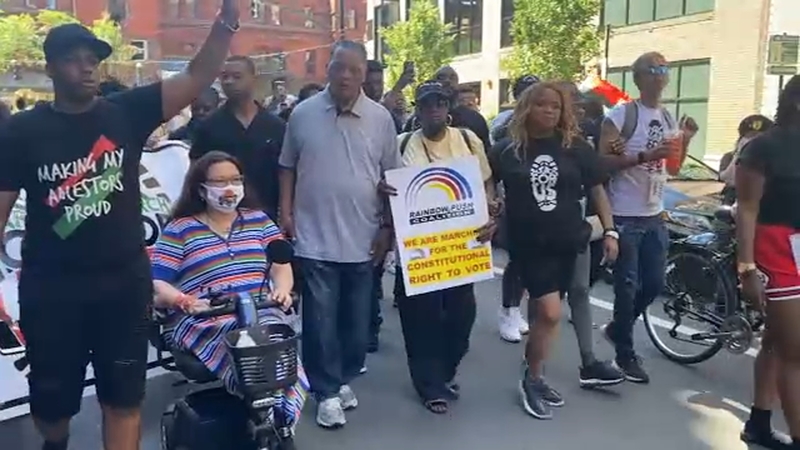 CHICAGO (WLS) -- Saturday is Juneteenth, the day that celebrates the end of slavery in America.

It's now an Illinois state holiday and a federal holiday.

On Saturday, people in Chicago and across the nation celebrated and commemorated the day in history.

Donnell Digby organized a block party near East 79th Street and South Woodlawn Avenue in the city's East Chatham neighborhood for the second year in a row.

There were many Juneteenth events held across Chicago and the suburbs Saturday.

"If you can continue to create spaces where we can all touch, feel, understand each other and talk to each other, it creates impact," he said.

On the Far South Side, there were also joyous celebrations at the Beverly-Morgan Park Juneteenth Family Festival.

"I'm just thankful for our ancestors and everything that they did to provide this, the way for us right now," said Fred Doss.

There was even an event in South Loop to raise money for scholarships.

"This night is about making sure that our young people understand that we see them, that we feel them, that we love them, and that we will always be there committed to their success," Mayor Lori Lightfoot said at the Black Caucus Scholarship event.

Some West Side residents also participated in a car parade, with some even on horseback.

Others took to the air on a special United Airlines flight from Houston to Chicago which featured an all-Black flight crew in honor of the day's significance.

"From dispatch, mechanic, the crew members, the pilots... everybody's Black. This is just amazing, and I'm so thrilled to be part of this experience," said United Airlines Pilot Deon Byrne.

"Officer I really feel our ancestors are here with us today watching their dreams come true through this crew," added Jessica Kimbrough, United Airlines chief diversity, equity and inclusion officer.

Reverend Jesse Jackson and Senator Tammy Duckworth participated in a march and rally in the Loop. Evanston also hosted a parade.

Juneteenth is short for June 19th, the day in 1865 when federal troops arrived in Galveston, Texas to let all slaves know they were free.

The news came two and a half years after the signing of the Emancipation Proclamation.

The day, also known as Freedom Day and Emancipation Day, is considered the longest-running African American holiday that honors the end of slavery in the United States.

The day commemorates the end of slavery, but not the end of the struggle.

"Our children need to see that so today the biggest benefit of Juneteenth is our children see us come together and celebrate something in history and it's a learning lesson for them," said Alderman Michelle Harris who represents the 8th Ward.

RELATED: How Juneteenth is being taught in Chicago area schools

"There are a lot of inequities in this country that we still have to roll up our sleeves together and work to overcome," Duckworth said.

A few years ago, many had never heard of Juneteenth and its history, but now annual celebrations are planned.

The DuSable Museum of African American History, which has been closed because of the COVID pandemic since March of 2020, reopened to the public just in time to celebrate Juneteenth.

Looking for a Juneteenth celebration near me? Chicago is joining the nation in celebrating the new official holiday. The DuSable Museum is also reopening.

The museum's welcome back ceremony is one of many events marking the holiday.

There were numerous events to celebrate the day being hosted by community groups, churches and others in the area.

A collaboration of Black-owned businesses are getting together for "Lemonadeland."

"We are rebuilding our communities, and this event that's taking place tomorrow is taking place in our community, and I think it's amazing for businesses to have a support network," Chantell Benjamin of Sweet Skin of Mine said Friday.

This year's celebration comes as Chicago, Cook County, the state and federal governments have all designated Juneteenth as an official holiday.

"The formal recognition of Juneteenth as a national holiday is an important step," said U.S. Senator Tammy Duckworth.

Duckworth said the nation has a lot of work to do to tackle racial disparities.

"There are a lot of inequities that we still have to roll up our sleeves together and work to overcome," she said.

The museum will also be open Wednesdays-Sundays from 11 a.m. to 4 p.m. Admission will be free for the rest of June.

Mayor Lori Lightfoot tweeted about the holiday Saturday, saying, "This #Juneteenth, let's make sure to not only honor and celebrate the many contributions that Black folks have and continue to make to this country, but also reignite our fight for equity, inclusion, and freedom for all."

On June 19, 1865, a declaration of freedom was issued in Galveston, Texas that freed Black people who were still enslaved three years after the Emancipation Proclamation of 1862. In 1866, formerly enslaved Black people in Texas would organize the first #Juneteenth celebration. pic.twitter.com/goUOEdl7D8