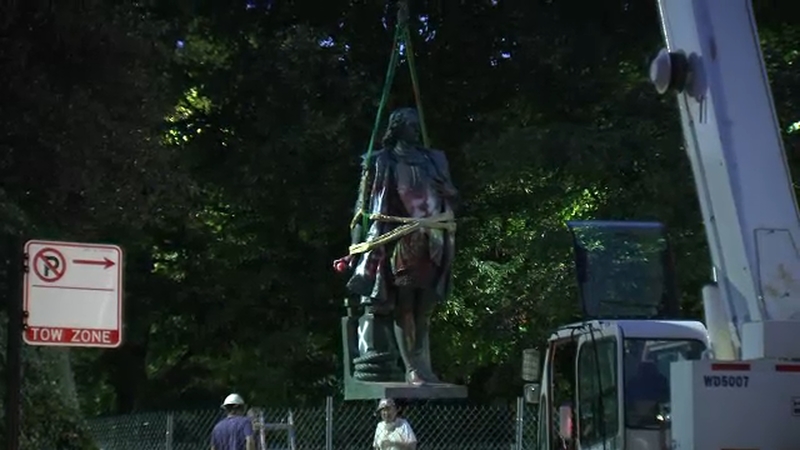 CHICAGO (WLS) -- Protests over the summer saw different Christopher Columbus statues in the city taken down and now, because of the pandemic, the annual Chicago parade will not take place.

However, many Italian Americans in Chicago still want the day to be celebrated.

The group is preparing to rally Sunday night as they ask the city for a timeline on when the Columbus statues will be returned.

It has been three months since the City of Chicago took down its three Christopher Columbus statues.

This removal at Grant Park came in the middle of the night in July after large protests and violence erupted.

The move came as groups denounced Columbus for his treatment of indigenous people.

But as we approach Columbus Day Monday, the conversation continues.

"It is a very special holiday to us Italian Americans, a generations-old tradition,' said Ron Onesti.

Onesti is the vice president of the Joint Civic Committee of Italian Americans. He said those statues are part of the history of Chicago and the Italian American heritage.

"There are more Italian Americans in Cook County than any other county in the country, second to New York," he said.

The group is planning to honor the late Italian explorer on Columbus Day Monday, which is still a national holiday.

But for the first time in decades, the parade canceled due to COVID-19.

Despite the obstacles, the group said a socially distanced event will go on.

"We are finding that people who are celebrating this holiday for generations just need a bit of positive," Onesti said.

Just days ago, the committee hand-delivered a letter to the mayor's office requesting the return of the statues.

Mayor Lori Lightfoot responded by saying that she is working with stakeholders, including those from the Italian community. The city also created a monuments and memorials committee.

"[We] will make a range of recommendations, not just on a single stature, but on ways in which we can bet do a better job, reflecting Chicago's history," Lightfoot said earlier this week.