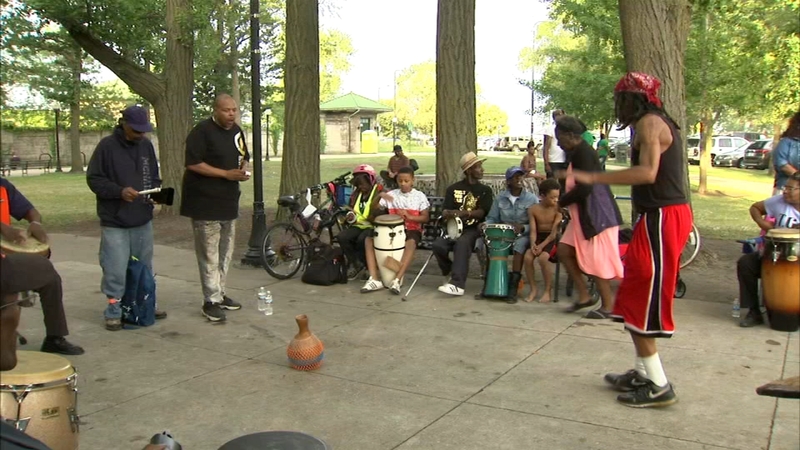 CHICAGO (WLS) -- Every evening at dusk, they know to come and form a circle outside the famed beach house near the lakefront on Chicago's South Side.

The 63rd Street Beach drum circle has met every day for the last 40 years.

"We've been doing this for years to uplift this part of the neighborhood that's been overlooked, said Milton Brown, South Sider.

"I've been coming here ever since I was in my mom's womb, I've been part of the 63rd Street drummers," said Tamara Clark, South Sider. "My dad was actually a drummer out here who was one of the founding fathers of the drum circle that you see today."

The drummers come from neighborhoods near and far, and all walks of life.

The circle calls the sidewalk in front of the 63rd Street Beach House home. Jerry Turry hasn't missed a summer of dancing and playing for the last 37 years.

"I get in the spirit of what's playing, you know, the vibrations that's going on and the let the spirit work through me," he said.

The only leader is unity. The only rules are no alcohol, no drugs, no profanity and no arguing.

The circle is open to all people and all instruments, not just drums.

"It makes me feel happy," said Michael Smith, drummer. "I think of my grandad sometimes, and my ancestors."

The rhythm of the drum circle provides stress release and more. Former Cook County Sheriff Ike Balogun is one of the circle's drummers; he started drumming when he was a teenager.

They play until the park closes, and they know while they separate for the night the community remains.

"We take care of each other," said Forrestine "Flo" Mills, drum circle coordinator. "We are a community, we are a family even beyond here. We bring food to share. We give each other rides home. It's just a community of love."
Report a correction or typo
Related topics:
community & eventschicagojackson parkbeachesmusic
Copyright © 2021 WLS-TV. All Rights Reserved.
More Videos
From CNN Newsource affiliates
TOP STORIES