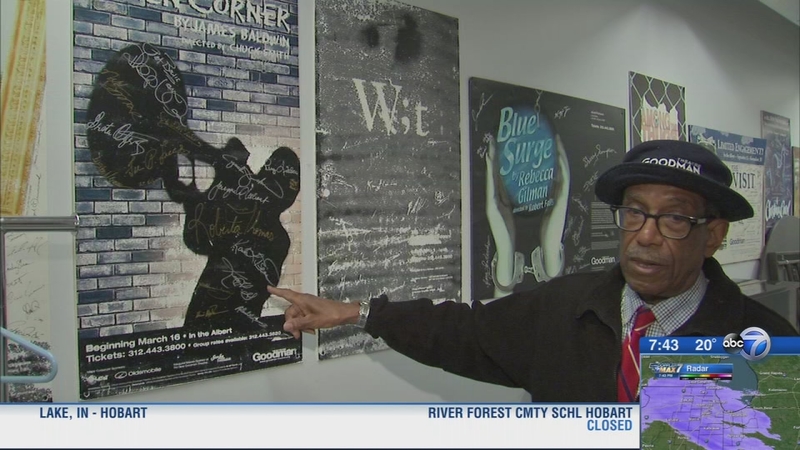 CHICAGO (WLS) -- Just around the corner from the ABC 7 studios, the Goodman Theater has been home to Chuck Smith for decades. He spoke to Eyeywitness News about how he came to love theater and his days growing up in Chicago.

"As a kid I was a resident of Bronzeville on the South Side of Chicago," Smith said. "My mother and father were original residents of the Ida B. Wells Projects."

Growing up, Smith had no plans of spending his life in theater. It was a passion he stumbled upon.

"Quite by accident, a couple of guys I was hanging out with were in a theater group at Michael Reese Hospital. Make a long story short, they talked me into coming down and I walked into the theater and I never walked out. Let's put it that way. I decided not to go back to the Marines and stay here and do theater," he recalled.
Smith started out acting but quickly set his sights on calling the shots as a director.

"I said one of these days I'm going to stay here and I'm going to be on staff saying goodbye to the actors," Smith said. "That took 20 years but I did it."

Smith is known for what many call a no-nonsense style of directing that keeps actors on their feet.

After 25 seasons and a countless number of plays it's the 1997 production of "Ma Rainey's Black Bottom" and his work with Pulitzer Prize- and Tony Award-winning playwright August Wilson that he is most fond of.

"That was my first, the first time I actually worked with August Wilson," Smith recalled. "So August Wilson came in right before the preview and he helped me shape the show to at the time set a box office record."

Records, awards, acting, directing and even co-founding the Chicago Theater Company are on his resume and there are no plans in sight for Smith to hang up his hat.

And when you ask him what history will say about Chuck Smith:

"He directed a lot of plays and they were good. That's what it's going to say," Smith predicted.

Smith's next play at the Goodman Theater is called "Having Our Say." It will premiere coming in May.
Report a correction or typo
Related topics:
community & eventschicagoloopentertainmenttheater
Copyright © 2021 WLS-TV. All Rights Reserved.
More Videos
From CNN Newsource affiliates
TOP STORIES