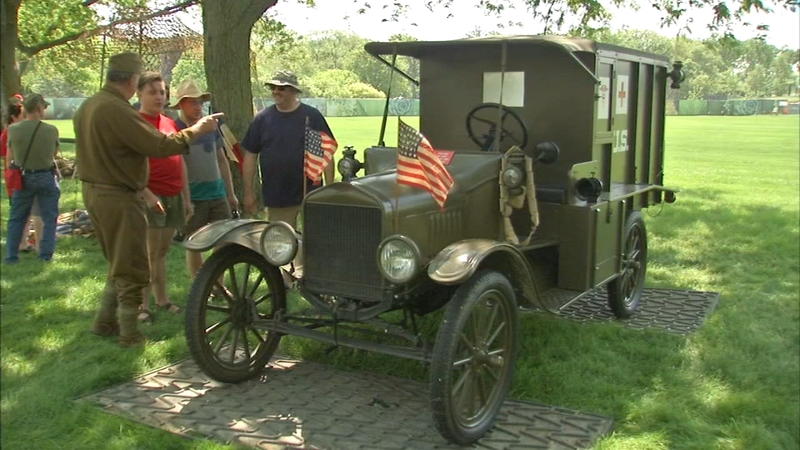 WHEATON (WLS) -- U.S. forces fought their first major battle in World War I exactly 100 years ago. It was the Battle of Cantigny: a small French village where 746 First Division soldiers would ultimately lose their lives.

Today, a century later and an ocean away, people gathered in a Wheaton Park to remember and celebrate the lives of those who fought at Cantigny.

Poppy flowers are recognized as a symbol commemorating all those who died in battle. Two thousand hand-made poppies filled Cantigny Park's museum Monday, representing the 2,000 American soldiers that were killed or wounded every single day throughout World War I. The sight was powerful and moving for visitors.

"We're both history buffs and had relatives, including my dad, who were veterans," said visitor Nick Stiso. "I had a great Uncle Tony who was a WWI vet and he came over about two or three weeks before WWI began in 1914."

Some young visitors may never have heard of the battle, but Catigny Park, with its museum and tank collection, served as an appropriate place to commemorate Memorial Day.

"It's a fun place for them to play, but then it gives them a little bit of a background of what it really means and today is about remembering people who fought for us, provided for us and protected our freedom over the years, and the kids start to understand this at an early age," said Jay Schaffer.
Report a correction or typo
Related topics:
community & eventswheatonsoldiersveteransmemorial day
Copyright © 2021 WLS-TV. All Rights Reserved.
More Videos
From CNN Newsource affiliates
TOP STORIES