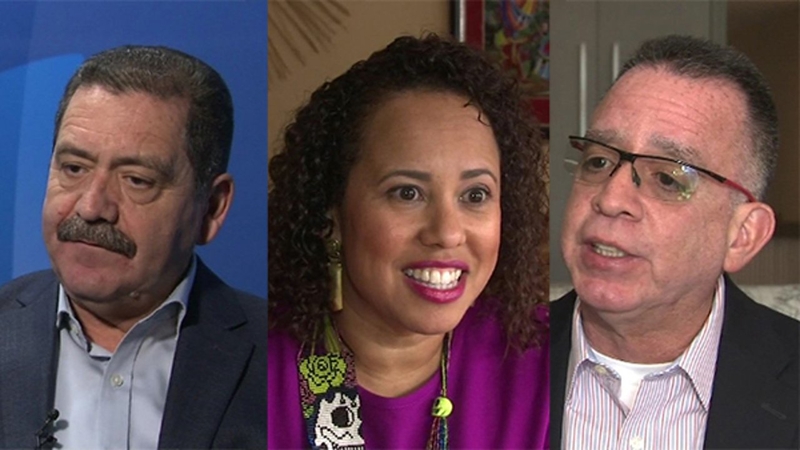 2 candidates drop out ahead of Democratic forum

CHICAGO (WLS) -- Alderman Ray Lopez (Ward 15) and Alderman Proco "Joe" Moreno (Ward 1) announced Tuesday that they are dropping out of the race for the 4th Congressional District to replace Congressman Luis Gutierrez.

Lopez and Moreno were set to take place in a Meet the Candidates forum hosted by ABC7Chicago and Univision Tuesday evening in Chicago's Little Village neighborhood. The three remaining candidates - Chuy Garcia, Sol Flores and Richard Gonzalez - will all take part in the forum.

And then there were three. Ald. Ray Lopez drops out of the race for @RepGutierrez seat in Congress. Jesus Chuy Garcia, Sol Flores and Richard Gonzalez only democrats left. They square off in a forum tonight @ABC7Chicago

Gutierrez endorsed Cook County Board Commissioner Jesus "Chuy" Garcia on the same day he announced he would not seek reelection.

Gutierrez made his announcement last November. He has represented Illinois' 4th Congressional District in Congress since 1993.

Garcia is considered the frontrunner to replace Gutierrez ever since he received his endorsement.
"An endorsement is not a coronation. The fact that seven people filed for this office on the last day of filing is indication that there was plenty of opportunity for people who wanted to run, to do so, but in the end it will be the election and the voters who will say who will represent this district, who will become the Democratic nominee," Garcia said.
Garcia said his decades of experience in the community and as a politician make him the best candidate.

Sol Flores, a homeless advocate and activist, said her 15 years working in the community make her the ideal person to represent the 4th District. She also believes Congress needs more women. Both she and Garcia said immigration reform is their top priority.

"We've got to get this done for our DACA recipients and our young people. I was there the day that my stepsister took her oath of naturalization - I have a mixed immigrant family - and I looked into her eyes and I saw hopes and dreams, what she wanted, and I want the same thing, and I want our Dreamers to have the same opportunities," Flores said.

Chicago police sergeant Richard Gonzalez, who has spent also spent years developing affordable housing in the area, is the remaining candidate. He called Gutierrez a one-issue congressman who focused solely on immigration. Gonzalez said the district has other issues as well.
"This district has been so abandoned, there are so many issues that need to be addressed here; education, we need resources to augment our education. It's such a large district, and I think economic development and jobs is very important to the residents of this district," Gonzalez said.
Lopez and Moreno announced their withdrawals in written messages to their supporters.

"As Alderman, I have been able to directly address the needs of my constituents and positively impact their lives in a way that I truly do not believe would be possible from Washington D.C.," Lopez wrote in a message to supporters. "After careful consideration and discussion with friends, family and community leaders, I have decided not to seek the Democratic nomination for Representative of the 4th Congressional District."

First Ward Alderman Proco "Joe" Moreno also announced his departure from the race early Tuesday, saying, "Our nation is at a crossroads right now and nothing would give me greater honor than to fight the Trump administration every day on behalf of the ordinary families who need it most. However, my constituents in the 1st Ward have given me the direction that my efforts should be focused here and my exploration of this race should end."
Report a correction or typo
Related topics:
politicschicagolittle villageelection 2018democratscongressional race
Copyright © 2022 WLS-TV. All Rights Reserved.
TOP STORIES
Man released from prison after twin brother confesses to murder
75 years after Al Capone's death, it's not your dad's Chicago Outfit
LIVE: Supreme Court Justice Stephen Breyer to retire
Scientists monitoring new omicron subvariant BA.2
Husband shares journey after losing wife in crash that killed Kobe
CPD investigating apparent Loop burglary at LensCrafters store
School Closings: Chicago Area Complete List
Show More
Death of ISP trooper, wife ruled a murder-suicide
1 dead, 38 missing after boat capsizes near Florida; 1 survivor found
Man denied heart transplant because he has not received COVID vaccine
Man falls on tracks, conductor hurt at Division Blue Line station
Chicago weather forecast includes bitter cold, dangerous temperatures
More TOP STORIES News