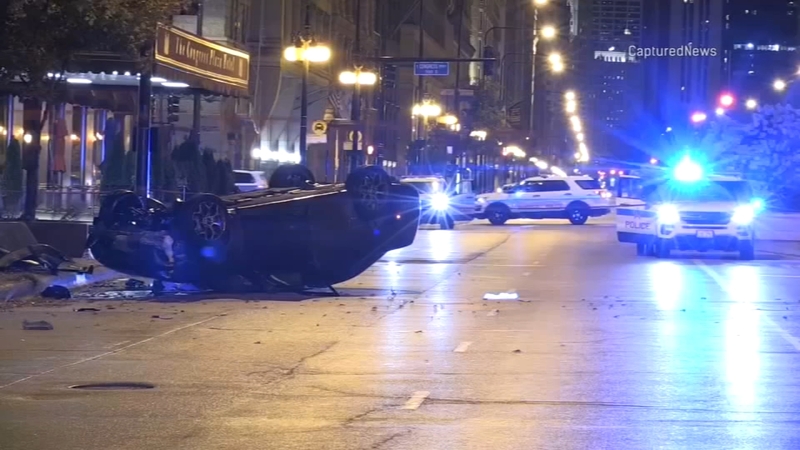 CHICAGO (WLS) -- Four people were shot, two fatally, after a shooting inside a car that crashed in front of the Congress Plaza Hotel in the South Loop.

Five people were inside the car as the driver was going south on Michigan Avenue at about midnight Monday morning when someone inside started shooting, police said.

The driver hit a light pole and a planter box in front of the Congress Plaza, in the 500 block of South Michigan Avenue and then flipped on its roof.

A delivery driver who was inside the hotel watched as two of the people in the car rushed into the lobby. They were quickly stopped by security.

"Paramedics got in they pulled him out," witness Syed Mahoodi said. "He was bleeding profusely. He was terribly injured I would say."

Bruce Y. Miller, 29, of the Jeffrey Manor neighborhood, suffered a gunshot wound to the head and was taken to Northwestern Memorial Hospital, where he died at 12:37 a.m., according to Chicago police and the Cook County medical examiner's office.

Steve Nixon, 30, of the Chatham neighborhood, was also taken to Northwestern after being shot in the face, authorities said. He was pronounced dead at 12:39 a.m.

Two 29-year-old men were both wounded in their shoulders and hospitalized in stable condition.

"The bullet went straight through his shoulder blade and went out, so he's OK," said witness Kayla Glover.

A fifth person in the car that ran inside was hospitalized with back and neck pain.

Witnesses were glad it didn't happen at busier time of the day.

"I was scared, totally scared," Mahoodi said. "Never thought I would see something here in downtown in my life."