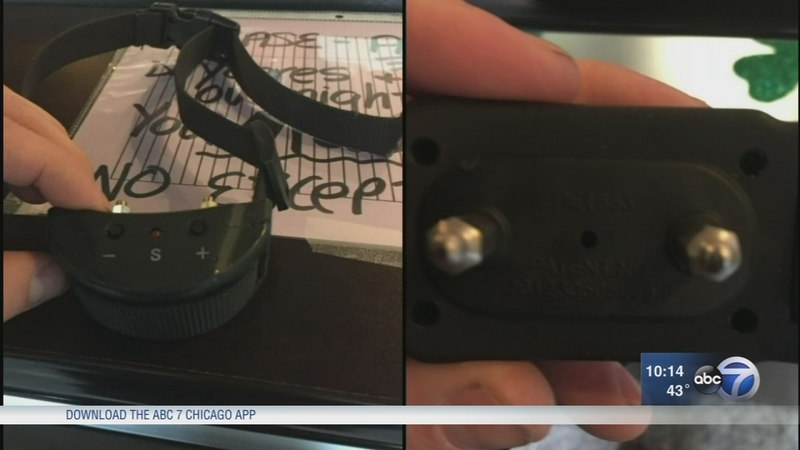 CHICAGO (WLS) -- A Chicago man says he was concerned to find an unauthorized electric shock, anti-bark collar around his dog's neck when he picked her up from pet daycare.

Luke Mullaney, of the Mount Greenwood neighborhood, says he had been taking his dog Mya to Posh Pet Day Spa twice a week for almost a year. Earlier this month, when he picked her up he says he noticed an unusual black collar attached to Mya, clipped underneath her normal collar.

"I noticed there was a big box on the side of the collar and that box was almost directly on her throat," said Mullaney. "The troubling thing was the first thing she said when I walked in the door and held it up was 'uh oh.'"

Mullaney took photos of the collar -- a Petrainer Pet853 anti bark electric collar that, according to the instructions, "stops barking with progressively increasing sound and shock."

"I asked her why it was on the dog and she said obviously the dog was barking too much," Mullaney said.

The collar's paperwork says it first makes "two beeps to deter barking" and then a "shock after each bark" using "increasingly intense tones and shocks," a "painful stimulus" to "break bad habits."

Chuck Goudie: So why do you have these here if they're not used on the dogs that are brought in?
Posh Pet Owner: Because, I use one on my own dog, he's a beagle-basset mix, my daughter uses one on her, it's a correction collar, there's absolutely nothing, I mean, they wouldn't sell them in the stores if they didn't work.

In response, Jim Bahr, head trainer at Urban Pooch Training and Fitness Center, said: "That, to me, is crazy."

Bahr said dogs should be trained through positive reinforcement.

"Just think if you were being shocked for something and you didn't fully understand what it was for, and even if you did, is that something really you want to do," Bahr said.

The owner of Posh Pet Day Spa in Mount Greenwood said she tried to explain to Mullaney that the collar was mistakenly put on his dog.

Posh Pet Owner: I tried to show him the whole, they whole row of collars on and it's very confusing and when you have new girls on and there's collars all mixed up, it's a hard thing.
Chuck Goudie: So it was used on his dog without his authorization.
Posh Pet Owner: No it wasn't, it was a mistake by a new girl...
CG: What's the business' policy on the use of these?
Posh Pet Owner: I'm not here for an interrogation, I'm asking you to leave.

Posh Pet Day Spa refunded the visits that Mullaney had paid in advance. He said he's now looking for a new place to take his dog.