Thursday is Election Day in Cook County for chief judge 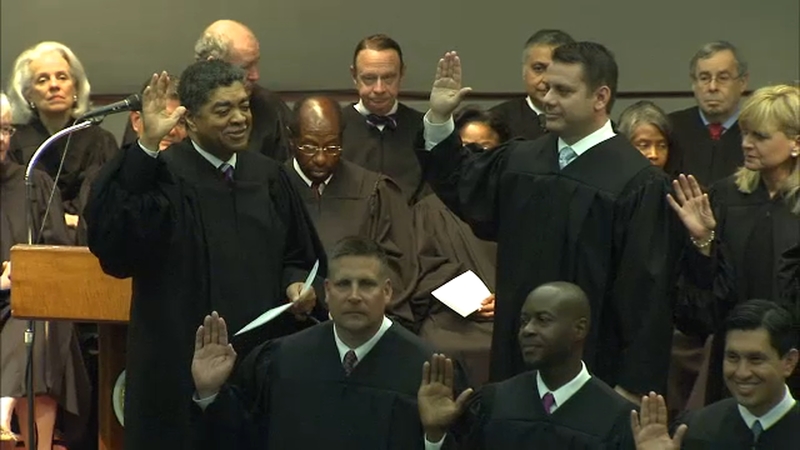 CHICAGO (WLS) -- One of Chicago and Cook County's most important elections will be held on Thursday and the vast majority of residents won't be able to cast votes.

The election is for the county's top judicial spot, chief judge of Cook County, a position that oversees the second largest court system in the nation.

In what some insiders are casting as an extremely tight race between long-time chief judge Timothy Evans and veteran attorney and judge Lorna Propes, the county's most powerful judicial position will be decided by about 250 circuit judges who serve under the chief.

Evans has held the chief judge post for nearly two decades, longer than anyone in modern court history, and has been reelected five times -- frequently by wide margins.

But that longevity is one of the key campaign issues leveled by challenger Propes against the incumbent.

"Now is the time to break with the past and have the courage to shape our own future" Propes said in a campaign video directed at the voting judges. "After 18 years a vote for new leadership is not an act of disloyalty it's a commitment to the future of the court."

Tim Evans plays up his years as chief judge. Evans, who is currently paid a circuit judge's salary of $191,609, receives no extra pay for being the chief. However, the chief judge is a position of power and prestige, overseeing 2,400 non-judicial employees, a total of 400 judges and a $272 million budget.

In his own video, Evans told judges who will vote during a private meeting tomorrow that "I hope that you will agree that over the years with commitment to fairness and integrity, we have brought reforms to our court which are both innovative and compassionate and equally importantly embraced changes which continue to produce justice for those who appear before us."

As high-profile criminal cases have focused worldwide attention on Cook County's courts, several county judges have been embroiled in odd misconduct cases and bond reform has raised public safety questions, the role of judges has been under a microscope.

"I was part of the last retention class in which our judges were battered by an unprecedented series of attacks from special interest groups" said Propes, a former assistant state's attorney and trial lawyer and currently a Law Division judge. "What I saw was a court administration wholly indifferent to the needs and concerns of our judges... An administration that allowed the very reputation of the judiciary to be undermined in the community at large. It was then that I resolved to run. To change things."

Evans has noted the changes he has made while chief judge: new courts for those with mental health and drug problems and veterans courts.

"We have made significant technical improvements so that our judges have access to a judicial portal they can communicate with each other," Evans said. "They have laptops on every bench and we have a system in place where the defendants with text messaging can be notified in advance so they can come to court on time."

The Cook County chief judge's term lasts three years. Neither Evans nor Propes were available to speak on television about Thursday's election, but their campaign videos put their positions out front.

"I readily acknowledge that the chief judge represents the sum of the contributions put forth by all of you," Evans has told voting judges. "I recognize further that one does not earn loyalty in a day, one earns loyalty day by day. Greatness is excellence sustained over time. I've worked hard to support our judiciary and to earn your confidence. I humbly ask for your support for the next term."

So does Propes, telling her fellow judges that "the lynchpin of this campaign is about empowering you and I propose to do this first and foremost by being responsive to you. Returning your phone calls, consulting with you about court programs and initiatives... Bringing transparency to the assignment process. And defending you when you are mine by unfair political attacks."
Report a correction or typo
Related topics:
politicscook countycourtjudgecook countyelectioni team
Copyright © 2022 WLS-TV. All Rights Reserved.
I-TEAM
Wedding guest budgeting tips
Postal police say they are sidelined during time of heightened crime
ISP combating expressway shootings with new technology, tactics
IN man pleads guilty to being in US Capitol during Jan 6 insurrection
TOP STORIES
2 charged in Near North Side McDonald's mass shooting, CPD says
Girl celebrates 1st birthday after shot in head in mass shooting
ABC7 presents 'Our Chicago: Asian Voices'
Firefighters continue battling blaze at vacant west suburban resort
Man robbed at gunpoint on Red Line train; suspect critically hurt
1 critically injured in Dan Ryan Expressway shooting: ISP
21 shot, 1 fatally in weekend violence, Chicago police say
Show More
3 shot, 1 critically hurt on West Side, police say
Expect traffic, street closures for Chicago half marathon
Some peanut butter recalled for potential salmonella
Biden pushes economic, security aims as he ends South Korea visit
Sunday Mass at Holy Name Cathedral
More TOP STORIES News