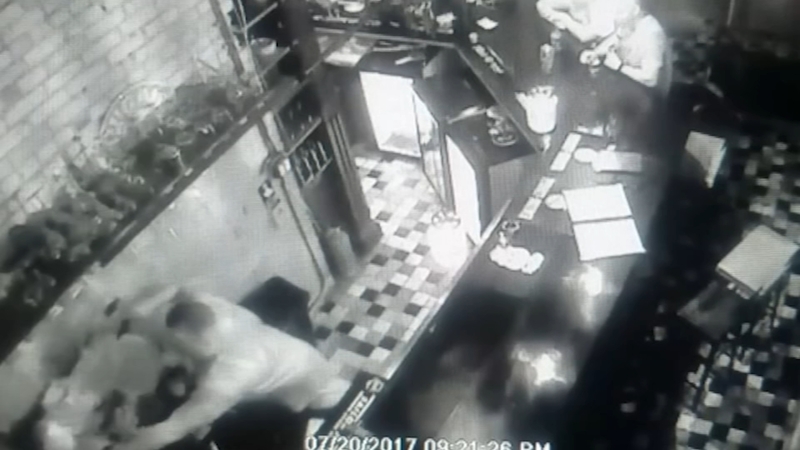 JOLIET, Ill. (WLS) -- A Cook County sheriff's officer is facing a possible termination after two incidents, including one that was recorded on a bar surveillance camera in Joliet.

Officer Michael W. Doyle has been suspended, without pay, since February 14th, 2018, according to Cara Smith, a sheriff's office spokeswoman. The sheriff's office requested that he be terminated after two incidents in 2017.

The department took its case to the Cook County Sheriff's Merit Board, which is expected to make a final decision soon.

"The hearing before the Cook County Merit Board has been concluded and we are hopeful the Merit Board will uphold our request for termination," Smith said.

Doyle faces the potential termination after an incident was caught on a Joliet bar's surveillance camera.

Footage at the Tin Roof bar on July 20, 2017, showed Doyle walking behind the bar, shoving the bartender against the wall, pulling out a folding knife, and holding the weapon next to the bartender's head, according to sheriff's records obtained by ABC 7 EyeWitness News.

Bartender Paul Wagner has filed a federal lawsuit against Doyle and the sheriff's office.

"What do I do? Is this guy going to kill me?" Wagner said during an interview at his attorney's office. "He grabs me by the throat and pulls out a knife and holds it to my head. He started shouting: 'Which house is yours? Which house is yours?' Which made no sense."

Joliet Police arrived, but Wagner said the bar's management waved them off. Joliet Police said the department investigated the case, but they have not responded to questions about charging Doyle in the case.

After the bar incident, Wagner got a text from Mike, apologizing.

"What started off to be a bad joke ended up being a dumb idea, you have my most sincere apology," the text said in part.

"I spoke to (my) wife and told her what had happened and she agrees I'm the biggest idiot in the world," the text went on to say.

Wagner feels the incident was far from a joke.

"I don't know anyone who has had a stranger pull a knife on them and laugh about it. It wasn't a funny situation. It wasn't a joke. It was life or death," Wagner said.

"The video of the assault is evidence of a crime. It should have been used against Officer Doyle. It wasn't. They didn't pursue it because he was a police officer, and they don't pursue their own," said Kosoglad.
After the bar incident, records show Doyle was arrested for DUI November 18th, 2017 in downstate Charleston. He pled guilty a month later.

"He shouldn't be an officer, point blank," Wagner said.

The sheriff's department released a statement, stating in part: "We are seeking the termination of Officer Boyle who was suspended, without pay, on February 14, 2018."

As for Wagner, he believes there is a double standard.