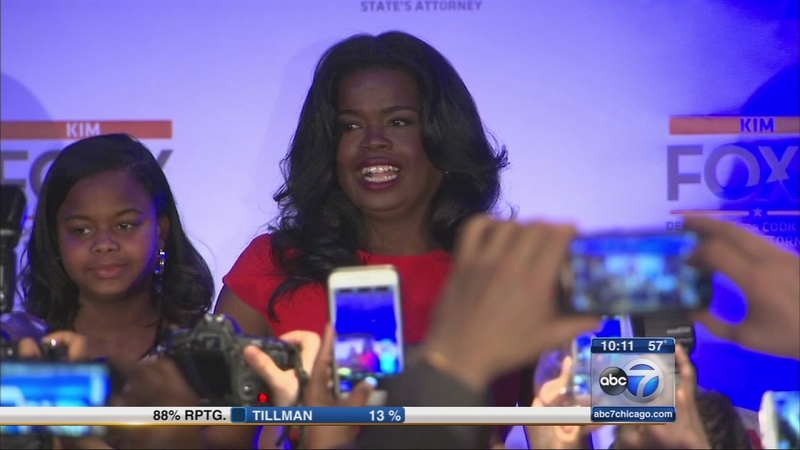 CHICAGO -- Voters have ousted the Chicago area's top prosecutor in a Democratic primary race focused on the office's handling of the shooting death of a black teenager at the hands of a white police officer.

Kim Foxx's victory Tuesday over Cook County State's Attorney Anita Alvarez sends her to a November matchup in which she will be heavily favored.

Alvarez addressed supporters Tuesday evening, where she said she's proud of the work her office has done, despite her losing the Democratic nomination for a third term.

Much of the campaign centered on Alvarez's handling of the police-involved shooting of Laquan McDonald. It took her office more than a year to bring charges against a police officer accused of fatally shooting a black teenager 16 times. Alvarez defended the amount of time by saying the investigation was meticulous.

Alvarez didn't mention the case in her speech, but says she probably lost because she wasn't a very good politician.

Alvarez says she hopes her successor will continue to fight gun violence and keep programs that she started.

The campaigning went down to the wire Tuesday for candidates running for Cook County state's attorney. In search of votes wherever possible, Donna More was at a stop with presidential candidate Bernie Sanders.

"And as everybody knows, I'm running against the machine because I think the voters deserve an independent state's attorney who will prosecute crime no matter who commits it," More said.

Incumbent Alvarez became a national figure in case of Laquan McDonald. She has defended her handling of the shooting that has resulted in a police officer charged with murder.

"But I think we have to make sure we focus on the right things. Just last night, three police officers were shot, 12 people shot in the last two days - we have a serious violence problem here in Chicago," Alvarez said.

"This race captures one of the great tensions of our time right now, which is the tension between prosecuting and investigating crime aggressively and worrying about excessive force by the police. And it's a line that a lot of cities have walked, a lot of agencies have walked, and so it's front and center right now," Soffer said.

Kim Foxx has campaigned as a candidate that will bring change to the office of Cook County's lead prosecutor.

"I vote for everybody," Sianis said.