James Gorham is a third grader at Burnside Scholastic Academy. He and his family are among the 33,000 CPS students trying to get used to their new normal.

"What's expected of him? Am I supposed to take notes?" his mother Jurema Gorham wondered. "What if I have a question, do I raise my hand? So, I think that's the biggest thing. Today was the first day of, course, they did, like, an orientation of how they're going to use the platform."

The Van Lear family, which has three children at Swift Elementary on the Far North Side, started the remote learning plan from home bright and early at 7:30 a.m.

The family said it marks a more structured remote learning day after the school system had a week off for spring break and the plan is now more refined.

"They have really adapted well to the e-learning. I think," parent Phillip Van Lear said. "What's been tough for them is not being able to hang out physically with their friends with their classmates."

On the other side of the city a senior at Jones High School learned Shakespeare's Othello. Her mother is a public education advocate, worried not for her children but for others who may not be set up with access to laptops or tablets at home.

"I heard from a mom today, she said at her school they only have 60 Chromebooks that they can possibly give out to families, but the principal has in a request for 300 Chromebooks," said Jennie Biggs of Raise Your Hand Illinois.

CPS estimates they will distribute about 100,000 devices to students citywide, and 60,000 this week alone.

Amundsen High School, a level one school in Lincoln Square, sent some of their students home with what they already had in the building, but a few are still waiting for devices. Their second challenge is developing a curriculum that works for remote learning. For high school, that represents a minimum of 270 minutes, or four and a half hours, of instruction per day.

"Some of it is allowing students to work on their own," said Amundsen Principal Anna Pavichevich. "Just like a student would do in class, a teacher would say 'Go work in teams,' 'go work on projects.' And then some of it is live, where there is actual instruction, where there is a Google chat room, where a teacher pre-tapes a lesson and then puts it and then does messages."

Many CPS schools have posted spreadsheets with the schedules for each class and links to platforms, with each teacher still handling their own curriculum.

Teachers are allowed access to student's work, but in line with state guidelines, that can't bring down their grades.

For those schools who don't have enough devices on hand for their students, CPS said they are in the process of procuring what is missing so they can distributute it starting next week.
Report a correction or typo
Related topics:
educationchicagoedgewatercoronaviruscoronavirus chicagochicago public schoolscpscoronavirus illinois
Copyright © 2020 WLS-TV. All Rights Reserved.
CORONAVIRUS CHICAGO

What to know about Illinois' 121K COVID-19 cases 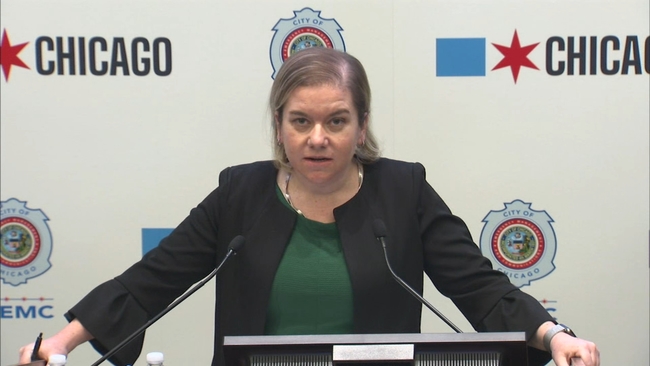 City officials ask those who attended protests, gatherings to self-quarantine